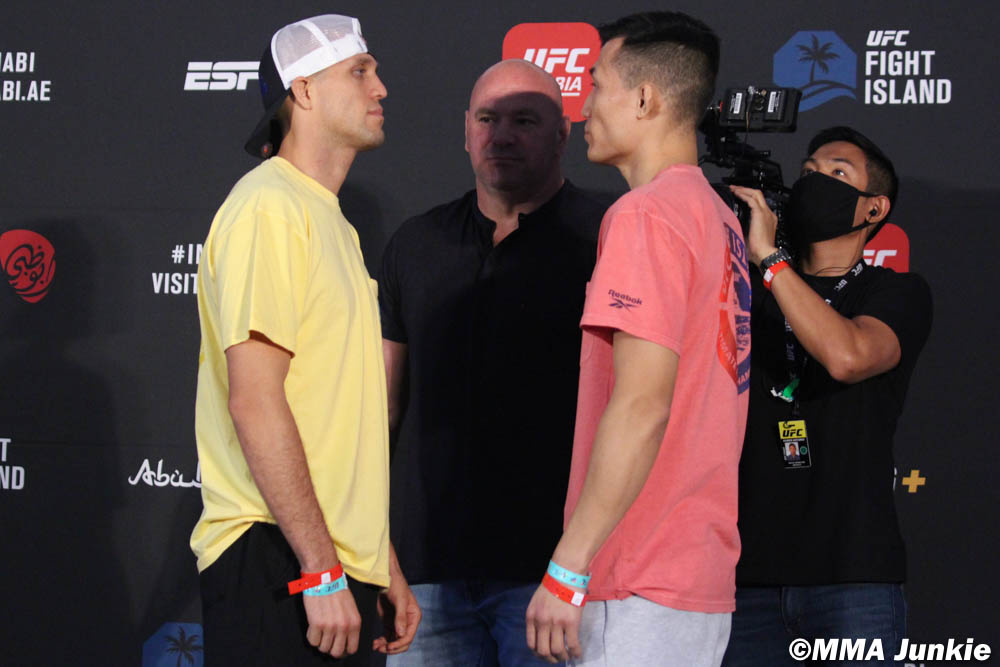 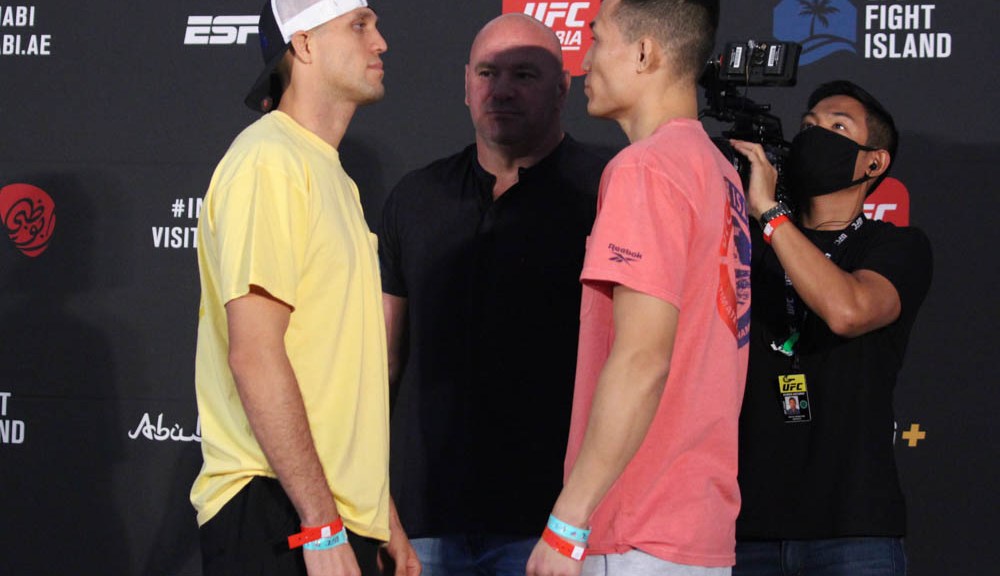 ABU DHABI – MMA Junkie is on scene and reporting live from Saturday’s UFC on ESPN+ 38 event, and you can join us for live play-by-play and official results.

The event takes place at Flash Forum at Yas Island in Abu Dhabi. The card streams on ESPN+.

Follow along with our round-by-round updates and official results beginning at approximately 4 p.m. ET for the ESPN+ prelims and 7 p.m. for the main card on ESPN+.

To discuss the show, be sure to check out our UFC on ESPN+ 38 discussion thread. You can also get behind-the-scenes coverage and other event notes from on-site reporter John Morgan (@MMAjunkieJohn) on Twitter.

Round 1 – A touch of gloves and we’re underway. Nurmagomedov lands a counter right hand. Striegl lands a low kick. Nurmagomedov goes high with a kick, which is blocked. Striegl is the aggressor early, using his leg kicks to keep range. Striegl rushes in and gets clipped by a Nurmagomedov left hand. Striegl stumbles and goes for a single leg. Nurmagomedov unloads a series of punches as Streigl still has hold of his leg. Striegl falls back and eats a series of hard fists. His head bounces off the canvas over and over again and the referee steps in – a quick KO to kick off the night!

Round 1 – The big Russian touch gloves and we’re underway. Both fighters start out hesitant in their orthodox stances. Through 90 seconds, it’s a staring contest. Grishin lands a leg kick and Antigulov grabs hold of him. Antigulov is pushing Grishin against the fence in the clinch. Grishin shoves Antigulov off of him. The two fighters return to the center of the cage. They clinch briefly again, this time in the middle of the cage, before separating. Antigulov throws a looping left hand, which misses. Antigulov grabs Grishin again, walking him back to the cage. Grishin lands a knee to separate. On the break, Grishin lands a combination that ends in a hard leg kick. Antigulov stumbles. That one stung. Antigulov jabs to the body. Grishin has much more hop in his step but Antigulov has been dictating the range. Grishin jabs and then lands a high kick. The round ends. 10-9 Grishin.

Round 2 – Grishin revisits his leg kicks early. Antigulov grabs hold of Grishin and rotates to his back. Against the cage, Antigulov is landing knees to the thigh of Grishin, who tries to break the grip. Grishin breaks the grip and now has Antigulov in the same position – against the cage, leaning on his back. Antigulov gets up and separates. The two fighters exchange. Antigulov grabs hold of Grishin’s neck for a guillotine. The fighters crash to the mat. Antigulov is still holding Grishin’s neck but they are in half guard. Grishin not only breaks Antigulov’s grip but moves to mount simultaneously. Grishin is landing elbows. Antigulov is trying to push off the fence but he’s eating a lot of short elbows. The referee is warning him. Antigulov explodes off the fence and bucks Grishin off. The two fighters return to the feet. Antigulov clinches Grishin and lands a mean right hand. That was his best shot of the fight. Antigulov clinches Grishin again. They separate and Grishin lands a combination to the head and body. With 10 seconds left, Grishin begins to unload on Antigulov, who is just covering up. With two seconds left in the round, the referee jumps in and stops the fight. Two fights, two finishes due to strikes tonight. Not a bad start!

Round 1 – Another glove-touch, another fight. Both fighters start off with a low-kick-heavy attack. Mullarkey lands a punch. Ziam throws a kick, but Mullarkey catches it and gets a takedown. Mullarkey is in Ziam’s half guard. Ziam sweeps him and ends up on top. Ziam lands an elbow. Mullarkey stands up but finds himself in a guillotine choke attempt. Mullarkey escapes and the two fighters are back on their feet. Mullarkey swings and misses. Ziam connects on another heavy leg kick. Mullarkey misses again. Ziam lands a right hand and Mullarkey ties him up. Ziam circles out of the clinch. Mullarkey lands a counter leg kick and misses on a punch. Ziam connects with a jab, then a leg kick. Mullarkey’s lead thigh is red already. Mullarkey is really finding success with his leg kicks now. He’s turning the momentum. Mullarkey lands a combination and Ziam shoots for a single leg. Mullarkey reverses into a takedown attempt of his own. The two hit the mat and get back to the feet right away. They separate as the round ends. 10-9 Ziam.

Round 2 – Mullarkey lands a kick and a follow-up combination. Mullarkey dives in for a takedown and eats a knee to the chest. Mullarkey briefly ties up Ziam against the cage, before they separate. Ziam lands a leg kick. Mullarkey is stalking him and lands a leg kick. Mullarkey connects on an overhand right. Ziam back peddles away, stops, and lands a high kick. Mullarkey continues to move forward. Ziam on his bicycle, rotating around the full length of the cage. The referee warns him for inactivity. Ziam throws a jumping knee, which Mullarkey catches and turns into a takedown attempt. Against the fence, Mullarkey pushes Ziam in the clinch. Ziam grabs double over-hooks and lands a knee. They separate before Mullarkey grabs hold again. Mullarkey misses on a punch. They return to center cage. Mullarkey shoots for a double leg and gets it. Ziam scoots to the cage and stands up. Mullarkey is leaning on him and drops down for another double-leg. Mullarkey gets it and is in half guard. Mullarkey lands a couple of short shots, but nothing significant. The referee issues an inactivity warning. Ziam moves Mullarkey into his full guard. Mullarkey slices to half guard, then mount. Ziam twists during the transition and sneaks out the back door. Back on the feet, Mullarkey tosses Ziam to the mat as the round ends. It’s all tied up at 19-19.

Fight Game on the ‘Gram