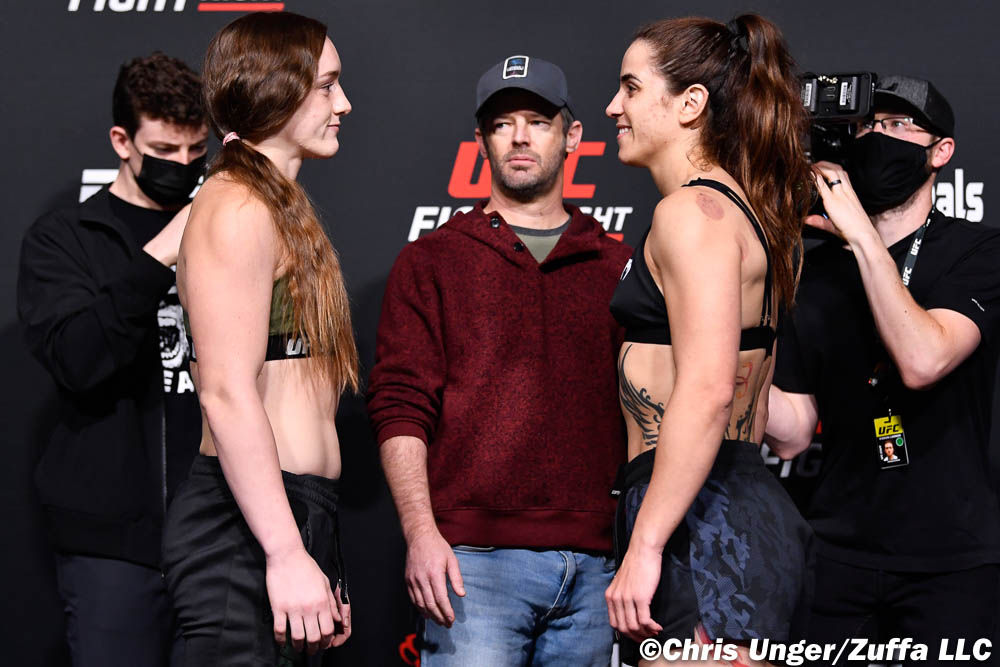 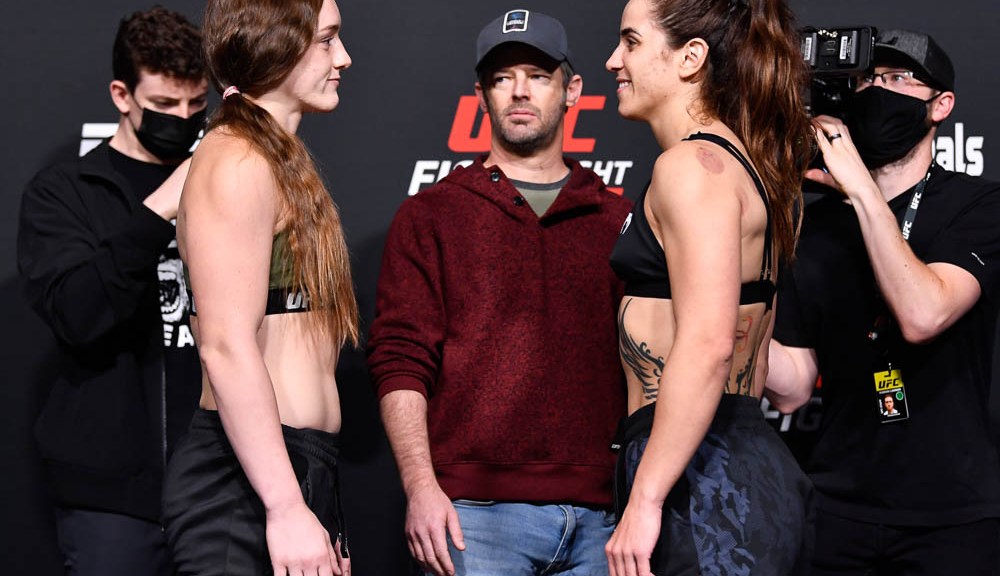 LAS VEGAS – MMA Junkie is on scene and reporting live from Saturday’s UFC Fight Night 195 event, and you can join us for live play-by-play and official results beginning at 4:30 p.m. ET (1:30 p.m. PT).

Follow along with our round-by-round updates and official results beginning at approximately 4 p.m. ET for the prelims on ESPN+ and 7 p.m. ET for the main card on ESPN+.

To discuss the show, be sure to check out our UFC Fight Night 195 discussion thread. You can also get behind-the-scenes coverage and other event notes from on-site reporters John Morgan on Twitter.

Round 1 – Glove touch and no waste of time with big punches coming from both sides. Carnelossi walking forward, but the taller Nunes retreating and landing stiff counters right down the middle. Brief clinch, but Nunes pulls away, and the striking resumes. Carnelossi moves inside for the takedown, and Nunes is warned for grabbing the fence as she tries to stay upright. Carnelossi gets the takedown, but Nunes pops right back to her feet and battles to the center. Carnelossi again very aggressive, walking forward and striking. Nunes with a nice kick to the body before Carnelossi punches her way into a clinch again. Nunes battling well against the cage. Pace has been nuts, and we still have two minutes left. Short elbow inside from Carnelossi. Knees traded, but Carnelossi is keeping the action pinned to the cage. Nunes finally slips away with a minute left. Carnelossi ducking her head and firing punches. Nunes mixing in a few kicks as she retreats and counters. Carnelossi throwing everything at full power. They trade right until the bell, and maybe a little after. MMA Junkie gives the first to Carnelossi, 10-9.

Round 2 – More of the same to start the second. Carnelossi very aggressive with her punches, and she moves forward and gets inside for the takedown. She drags Nunes to her knees but can’t get it any further. Nunes back to her feet, but she’s against the cage. Carnelossi keeping the clinch, and knees are traded inside. Nunes controls the head, but Carnelossi switches to a single and drags it to the floor. Nunes doesn’t have the neck, so she works back to her feet. Still, she’s trapped against the fence. Dirty boxing inside from both women. Nunes finally slips away and fires a knee as she moves to the center. Less than two minutes left. Carnelossi the aggressor. Nunes with stiff punches and big kicks. Carnelossi walking her down, and Nunes does slip away. She’s got to move laterally. Carnelossi pushes her to the fence, and once again she’s secured the takedown. Carnelossi steps over the legs. Nunes seated against the fence, but her legs are trapped. Carnelossi slides up a bit. Nunes turns to her knees and stands at the bell. MMA Junkie gives it again to Carnelossi, 10-9.

Round 3 – Nunes with a stiff right hand to open the third. Carnelossi not quite as hyper aggressive here, though she’s still inching forward. Nunes with a few front kicks to the body. She fires off big punches that Carnelossi slips. Nunes kicks the legs. Carnelossi stalking and digs to the body. Nunes kicks the leg. Elbow over the top. This time she slides away from the cage. Needed to be doing this from the start. Carnelossi rushes inside and changes levels. She drags the fight to the floor once again. Referee Keith Peterson pulls Nunes’ hand off the fence. Carnelossi on top and looking to strike. She slips over to the back. She wants the choke. She’s a little high, but she adjusts. Arm wraps around the neck, and Carnelossi torques the body as she squeezes with a Gable grip. Nunes has to tap.

Round 1 – Batgerel takes the center as Davis moves laterally on the outside. Both men looking to box early. Batgerel lands the first big shot, and Davis keels over before standing back up. Davis not looking especially comfortable early. Batgerel left hand landing frequently. Big right comes behind it. Another right sends Davis crashing to the canvas. He somehow crawls back up, but Batgerel is swarming. Punches coming in bunches. Davis turtles and then tries to stand. Batgerel isn’t stopping. More punches come in, and referee Herb Dean calls it off. Tough return for Davis.

Round 1 – The taller Carolina wants to use range early, but Godinez punches her way forward and presses the action to the fence. Carolina battling against the cage and looking to stay upright. She briefly pulls free and lands a knee and an elbow inside. Godinez quick to clinch again. She needs this fight on the floor. Carolina staying upright, but Godinez does slip around to the back. Carolina able to turn and face inside, and she pulls away. Back to the center. Carolina flashes out a front kick from range. Godinez quickly back to the clinch. She changes levels and pulls Carolina to a seated position. Carolina to a knee and looks for a sweep, but Godinez rolls with it and lands on top, immediately in side control with 90 seconds left. Carolina holding tight underneath. Godinez with a few elbows to the body. Godinez switches to north-south to secure the right arm. She rolls to the armbar at the bell but can’t quite get it in time. Methodical work there on top. MMA Junkie gives the first to Godinez, 10-9.

Round 2 – Carolina with a low stance as she looks to strike. Godinez cautious as she makes her way inside, but she does get to the clinch. Carolina able to push her away and reset. Carolina not pulling the trigger as she’s on the feet. Godinez ducks and lands a left hand. She keeps driving forward and is able to get to the clinch once again. Carolina again defends well and is able to push her away. Carolina with a kick, and Godinez latches on to the leg. She wants the takedown but can’t get it. Carolina punches the head a few times, forcing Godinez to adjust. Carolina eventually able to pull away. Carolina with a few low kicks, and she punches down the middle, as well. Godinez fakes a takedown and lands a nice right hand. Godinez trying to push forward, but Carolina doing a much better job keeping her away and landing punches. Into the final minute. Godinez lands a right hand and gets inside on a leg, but Carolina able to keep her balance and drive in punches as she defends. Godinez backs away, and we finish on the feet. MMA Junkie gives it to Carolina, 10-9.

Round 3 – Godinez needs to get inside, but Carolina preventing that at the moment. Godinez rushes forward and makes her way to the clinch. Carolina defends well, but Godinez adjusts and nearly slips to the back. Carolina using the cage to prevent the pass. Brief trip, but Carolina is immediately back on the feet and drives in a few knees as she defends. She pulls away and moves back to the center. Carolina looking to strike and has a high kick blocked. She kicks low. Godinez moves forward and lands a few big punches and is then inside on the clinch again. Carolina defends and spins off the cage, but Godinez ducks under and is again trying to take the back. Carolina using the cage to prevent that, and she’s trying to turn inside. Godinez can’t get it, and she backs away with a minute remaining. Godinez lands a right hand. She ducks under a high kick and is again inside on the takedown. Carolina spins off the and lands a knee. They separate again in the final seconds. Godinez catches a kick and presses to the end for the takedown. Close round. MMA Junkie leans toward Carolina, 10-9, awarding her the fight 29-28.

Round 1 – Roberts moving laterally on the outside and kicks low. He goes high, but it’s blocked. Emeev patient to start. He misses a lead hook. Second one lands. Sharp low kick for Roberts countered over the top. Both men moving well to start, seeking angles. Roberts seems a little bit quicker, but Emeev drops down and is quickly inside to drag his opponent to a seated position. Roberts trying to scramble back to his feet, but Emeev drives him to the floor. Roberts gets the left leg on the shoulder. He tries to set up a triangle and then looks for the arm. Not there, and Emeev slides past the legs, but Roberts scrambles up to his feet and pulls away to reset. Roberts again with a high kick that misses. Punches traded. Roberts moves inside for a takedown, but Emeev grabs the neck. Roberts pulls it free. Big punches traded at the end. Close round, but MMA Junkie leans toward Emeev, 10-9.

Round 2 – Emeev a little more aggressive to start, firing out some punches and driving forward for a takedown. Roberts up to the challenge early on, but Emeev drives him to the cage. Briefly to the canvas, but Roberts pops right back to his feet and starts throwing big punches. Emeev covers well and wraps the body. He slips around to the back. Roberts trying to break the grip, and he is able to turn inside and then grab a brief Thai clinch before pulling away. Roberts lands a quick punch but is then defending in the clinch again. He backs off, but Emeev changes levels and drives it to the floor. Roberts again active from his back and nearly takes hold of a crucifix. Tricky moments from Roberts, but Emeev is able to spin through and control the neck for a moment. Roberts rolls through it and moves back to his feet. He misses on a big left, and Roberts looking for the takedown. Emeev defends and recovers. Spinning shot from Emeev before Roberts clinches him again. Nothing there, so he backs away. Emeev with a nice shot before another clinch. Another close round, but MMA Junkie leans toward Emeev, 10-9.

Round 3 – Roberts moves forward quickly and wants to strike. Emeev does a good job of avoiding an initial rush and is able to clinch, but he can’t do anything with it. Roberts moves forward and digs to the body but allows Emeev to push him to the cage. Roberts pushes off and lands a few knees inside. He creates enough space to rip off a few punches that land clean. Emeev quickly wraps him up again. Roberts dealing well with the clinch and backs away. He’s landing in tight. Emeev fires a high kick that’s blocked. He shoots, but Roberts stuffs it. Roberts gaining some momentum, but Emeev keeping him tight. Under two minutes. Emeev grabs a clinch and drives it to the fence again. Roberts spins off and then pulls back for a few punches. He lands, but he also lets himself fall back into the clinch. Emeev can’t hold him there. They split with less than a minute. Roberts rolling well and lands a right hand. Emeev trying to grapple, but Roberts pulls free and keeps striking. MMA Junkie gives the final round to Roberts, 10-9, but awards the fight to Emeev, 29-28. Opening rounds were close, so we’ll see.