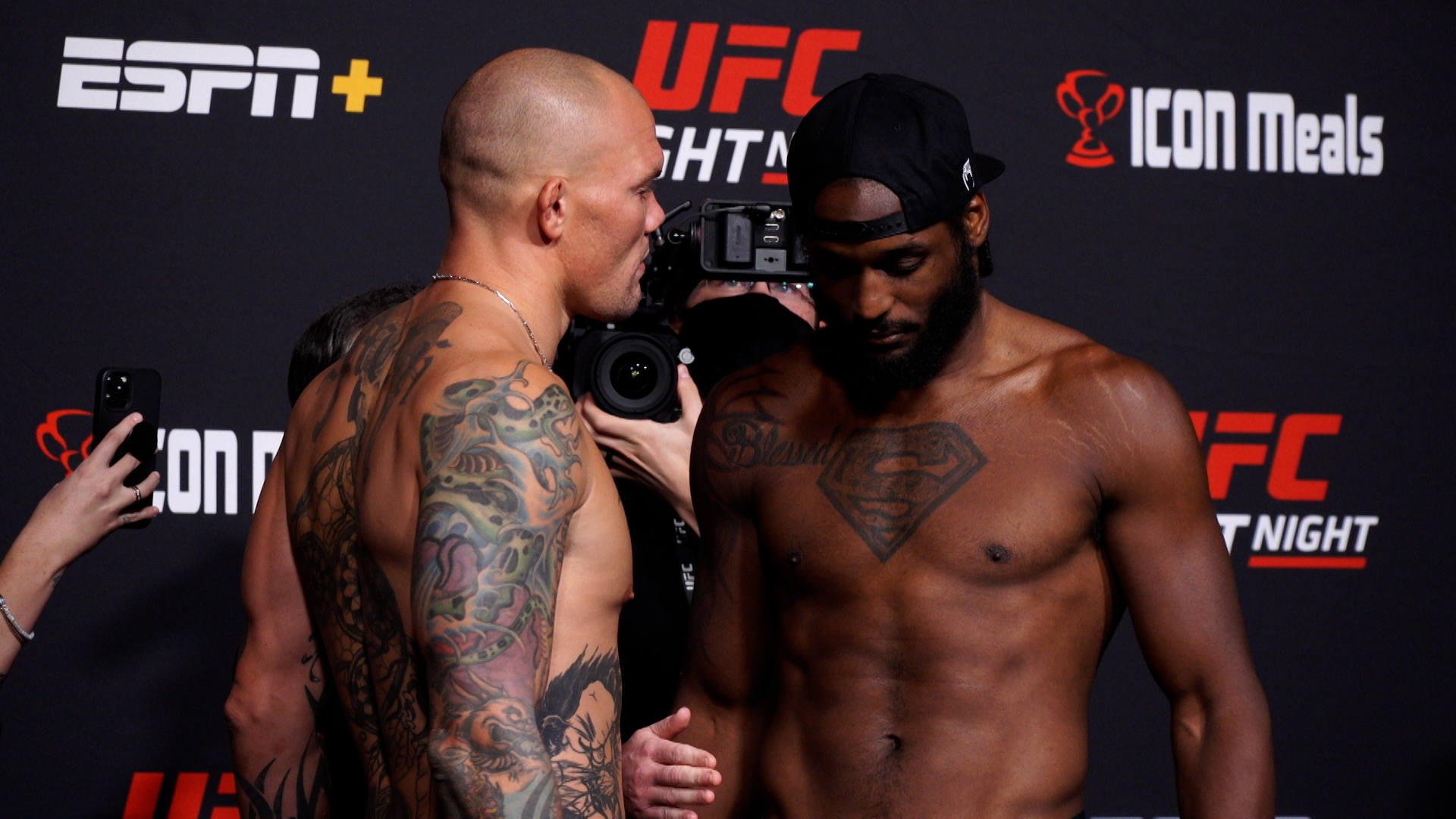 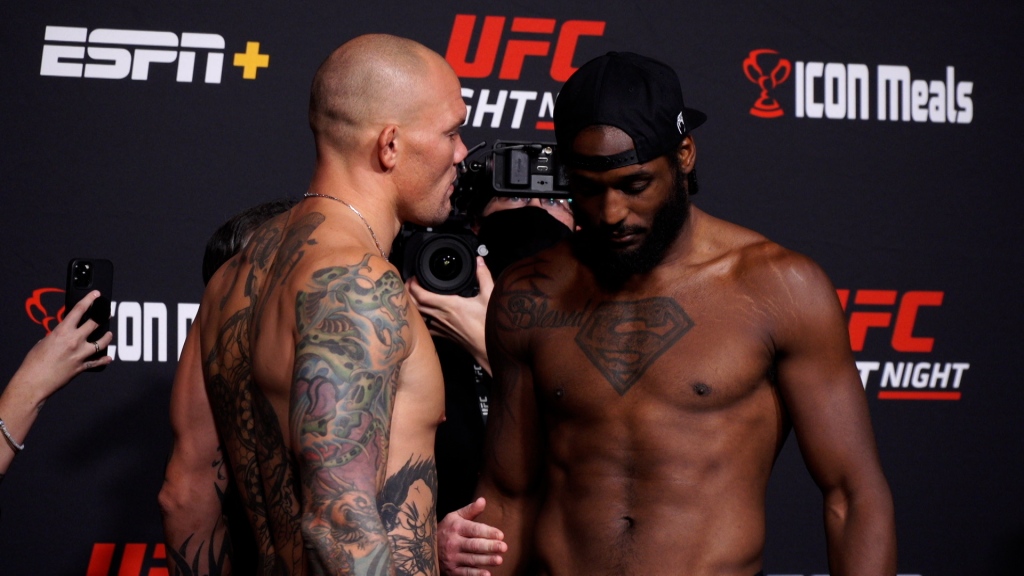 LAS VEGAS – MMA Junkie is on scene and reporting live from Saturday’s UFC Fight Night 192 event, and you can join us for live play-by-play and official results beginning at 4 p.m. ET (1 p.m. PT).

Follow along with our round-by-round updates and official results beginning at approximately 4 p.m. ET for the prelims on ESPN+ and 7 p.m. ET for the main card on ESPN+.

To discuss the show, be sure to check out our UFC Fight Night 192 discussion thread. You can also get behind-the-scenes coverage and other event notes from on-site reporter Ken Hathaway (@kenshathaway) on Twitter.

Round 1 – The fighters start out feeling the range by pawing out jabs and exchanging leg kicks. An exchange of punches upstairs land for both fighters. Goldy attempts a takedown but gets reversed by Whitmire, who ends up on top in guard briefly. Goldy kicks Whitmire away and they return to the feet moments later, but stay in the clinch along the fence. Whitmire gets a trip takedown and ends up on top again. Goldy is active off her back trying to land punches while Whitmire tries to improve her position. Whitmire quickly transitions to the back and threatens a rear-naked choke, but Goldy escapes and ends up back in guard. Whitmire stands up but closes back into Goldy’s guard again, but this time Goldy grabs an arm and immediately attacks an armbar. It’s deep and Whitmire has to tap out.

Round 1 – The fight starts with a brief feel-out process before they both exchange punches and clinch along the fence. The pair separate a moment later and return to the center of the cage. Alateng lands a right hand but Lopez responds with a flurry of punches of his own along the fence. After a few moments of inaction in the middle of the cage, they exchange strikes again, this time Alateng landing a stinging right hand that caused damage to Lopez’s left eye. Another hard exchange of punches occurs. A flying knee attempt misses from Alateng just seconds before the round ends. MMA Junkie scores the round for Alateng, 10-9.

Round 2 – Lopez attempts a low leg kick to get the action started in the second round. Alateng looks for a punch of his own as Lopez goes to the leg kick again, which lands nicely. Lopez focuses on the lead leg of Alateng and lands another pair of leg kicks, but Alateng answers with a punch upstairs. They exchange punches, with Alateng landing a nice right hand. Lopez feints a jab and attempts a takedown, but it is defended well by Alateng. Lopez lands another leg kick and Alateng answers with a right hand. The round comes to a close with another leg kick from Lopez. MMA Junkie scores the second round 10-9 for Lopez.

Round 3 – Lopez opens the round with a leg kick that doesn’t quite hit the mark. Alateng presses forward looking to land punches as Lopez circles along the fence. Overhand right from Alateng finds the mark in the center of the cage. He follows it up with a two-punch combination a few moments later. Lopez lands a left jab which sparks a furious flurry of punches and ends the moment by clinching Alateng against the fence. Alateng grabs the fence repeatedly as Lopez attempts the takedown and the referee pauses the action to take a point for the foul. The action is restarted in the same position and Lopez is able to briefly take the back and land punches. Alateng attempts a takedown but is countered with a guillotine attempt from Lopez. Alateng escapes and they return to the feet. Lopez attempts a takedown that is stuffed. A hard exchange occurs in the final moments that knocks Lopez off balance. MMA Junkie scores the round 10-8 for Lopez with the point deduction, giving Lopez the fight 29-27 overall.

Round 1 – Kasanganay opens with a left head kick that is met with punches from Harris in return. After an exchange of punches where neither fighter land flush, Harris closes in for a takedown attempt that is stuffed. Harris attempts a head kick that is blocked and lands a leg kick seconds later. Kasanganay looks to land a two-punch combination but Harris covers up well. Harris lands a kick to the body. The two exchange punches in the pocket, but Harris lands a right hand that wobbles Kasanganay. Harris charges forward with a flurry as his opponent goes down to the canvas. Harris continues to throw punches until the referee calls a stop to the action, giving Harris the victory by first-round TKO.

Round 1 – Alpar looks to get the action started quickly by opening with punching combinations. Blanchfield doesn’t back down and returns fire of her own, landing cleaner strikes. Alpar begins to step back and Blanchfield presses against the fence. Alpar lands a nice left hand as they return to the center of the cage. Blanchfield throws a right head kick that is blocked, but follows up with punches as Alpar tries to return strikes of her own. They clinch along the fence and battle for position. Blanchfield gets a trip takedown and ends up on top in side control. After controlling position, Blanchfield begins landing hard punches and transitions to mount. Alpar is able to transition back to half-guard as she does her best to limit the strikes from Blanchfield. The round ends with Blanchfield back on her feet, landing kicks to the legs of Alpar as she remained on the canvas. MMA Junkie scores the round 10-9 for Blanchfield.

Round 2 – The round begins right where the previous left off, as they immediately get back to exchanging strikes. Blanchfield controls the center of the cage, showing better defensive tactics as she dodges punches from Alpar. Blanchfield lands a combination and uses the forward momentum to initiate and secure a takedown. On top of Alpar along the fence, Blanchfield lands a couple of knees to the body and then looks for a choke attempt. Alpar tries to grab a hold of her opponent to stop the strikes, but Blanchfield continues to land punches. Alpar begins to transition, getting her back to the canvas, ending up in half-guard on the bottom. Blanchfield gets a knee on the belly a moment later and transitions to full mount. The round comes to a close with Blanchfield landing punches from mount. MMA Junkie scores the round 10-8 for Blanchfield.