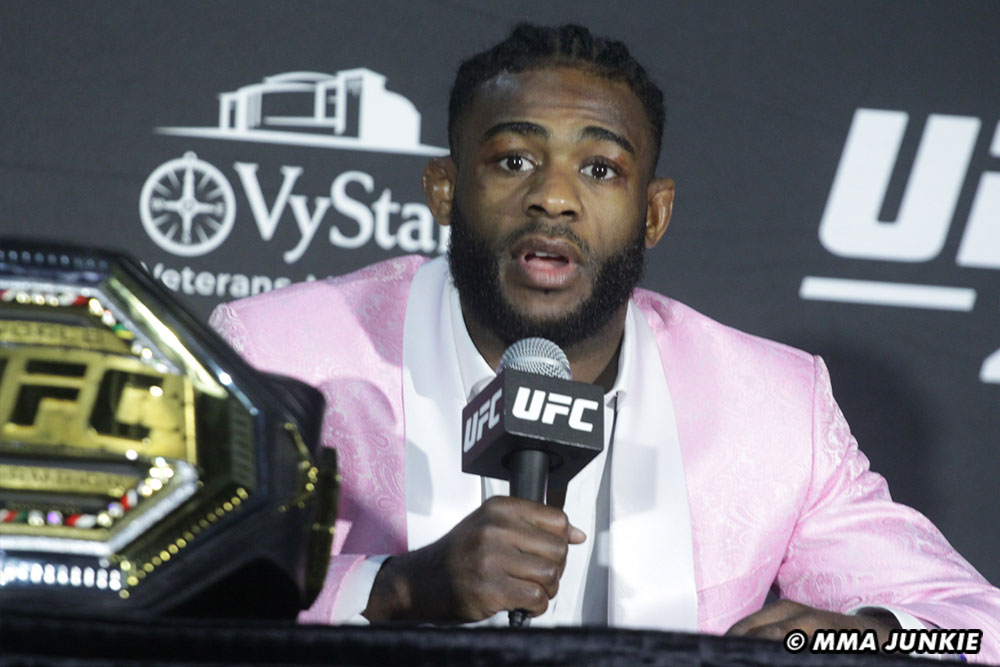 When you’re the champion, everyone is coming for your spot.

That’s why UFC bantamweight champion Aljamain Sterling has been keeping an eye on the entire division so that he knows what challenges lie ahead.

In a video posted to the UFC’s official YouTube channel, Sterling was asked to break down the top contenders in his division, from the legends to the hot prospects.

Check out Sterling’s thoughts on each fighter below, including a quick breakdown of himself. 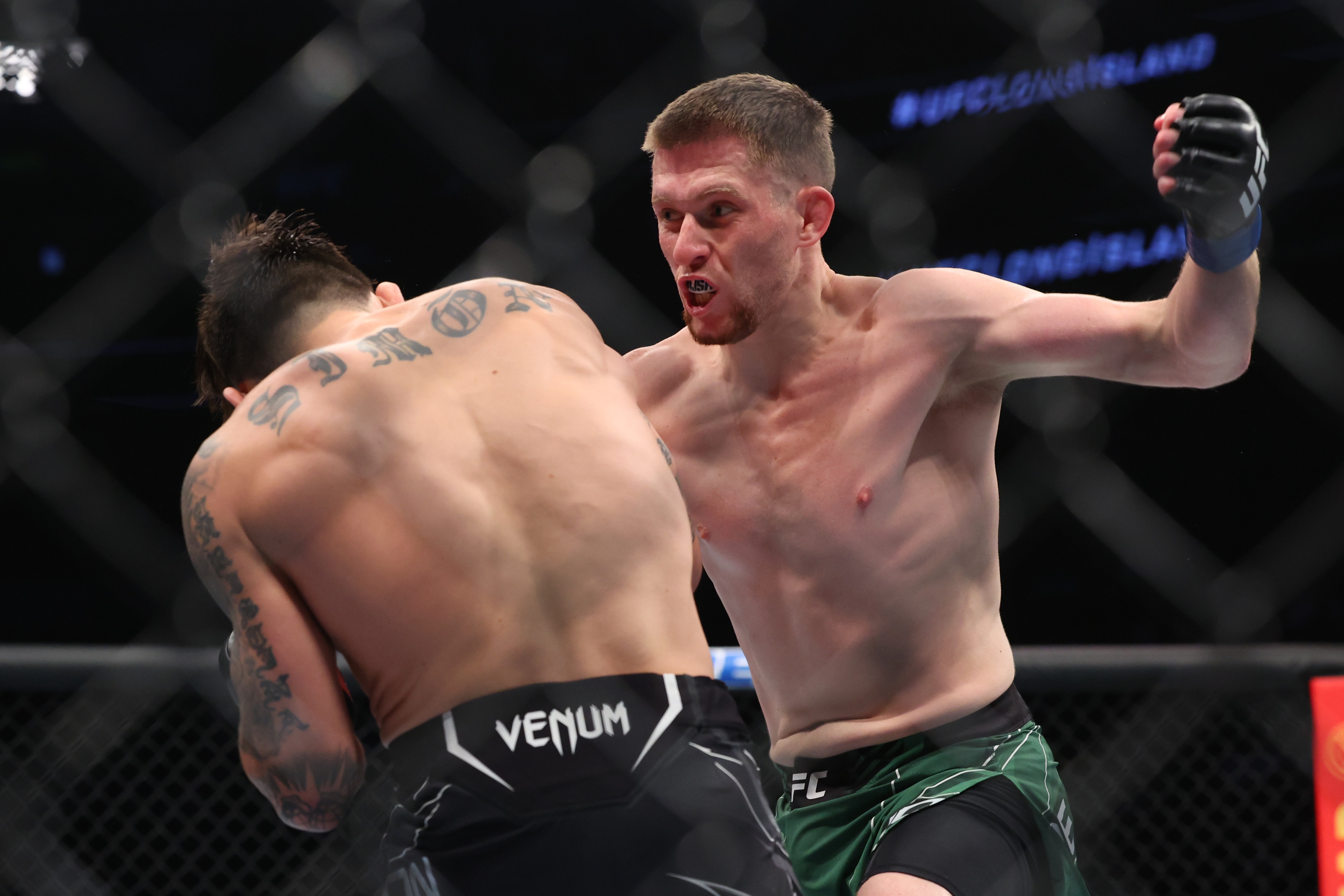 “Jack Shore, I can tell you one thing for sure, he’s got some good skills. Mostly a grappler, he surely got finished, but he can surely get back.” 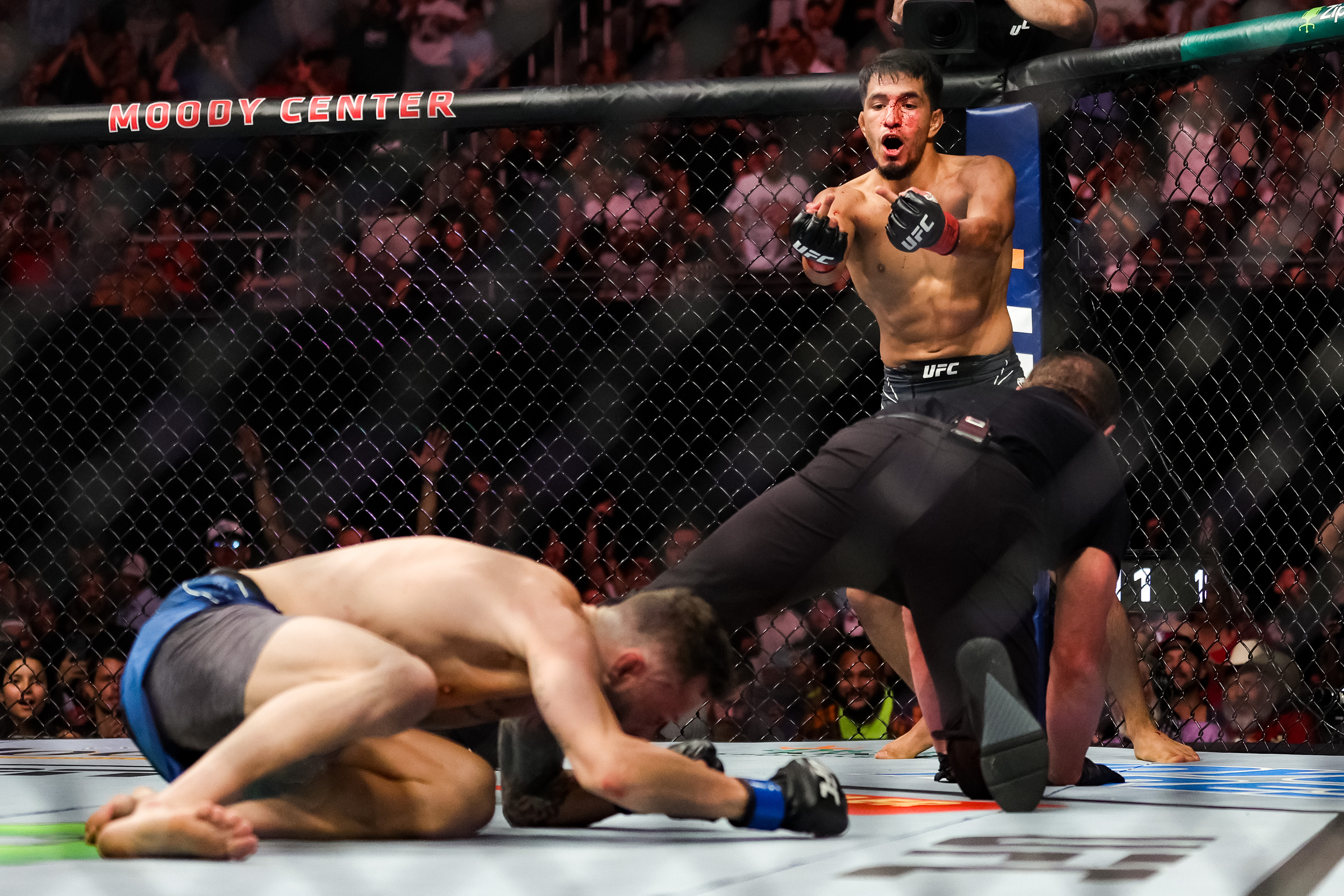 “Adrian Yanez, ‘Mr. H-Town,’ he’s a heavy hitter. That guy can throw some bombs. I think he slings them things pretty good. I think he’s somebody that people are gonna be very, very interested in watching for a very long time. When I brought him out (to train), we got a lot of work from each other. I got to work with him in the striking department, he got to work with me in the grappling department. So, it’s kind of a yin and yang. So, that was cool to bring out a prospect like that and just kind of keep my eyes on everybody.” 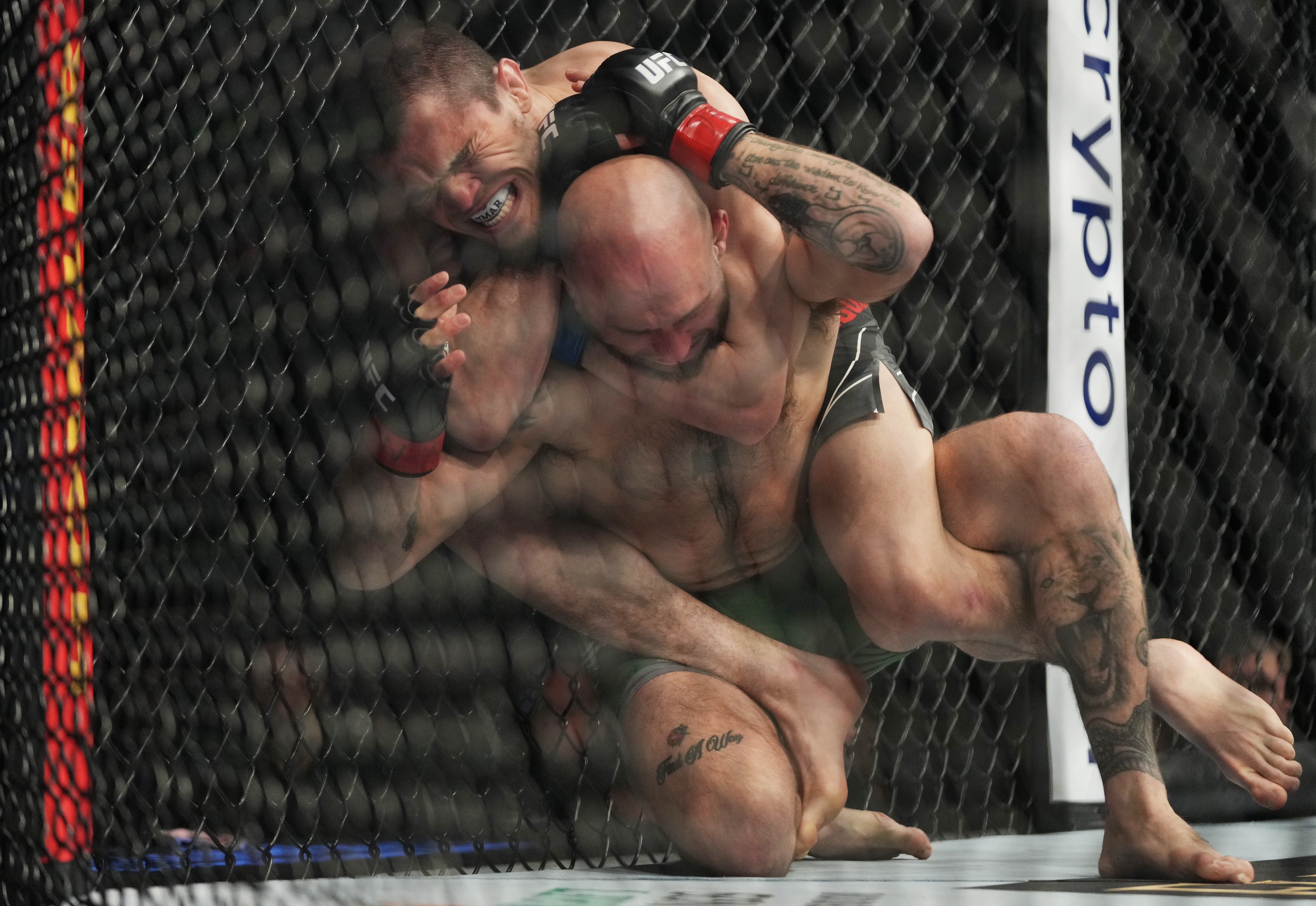 “Umar, what happened to that boy? He’s the ‘Birdman.’ The young eagle, the young prospect. A lot of people got a lot of hype on this guy. I think any good ol’ fashioned American wrestler is going to be able to handle a guy like that. He’s strong, he’s talented, he could be a future champion for sure just like his older cousin. But right now, the king is on the throne.” 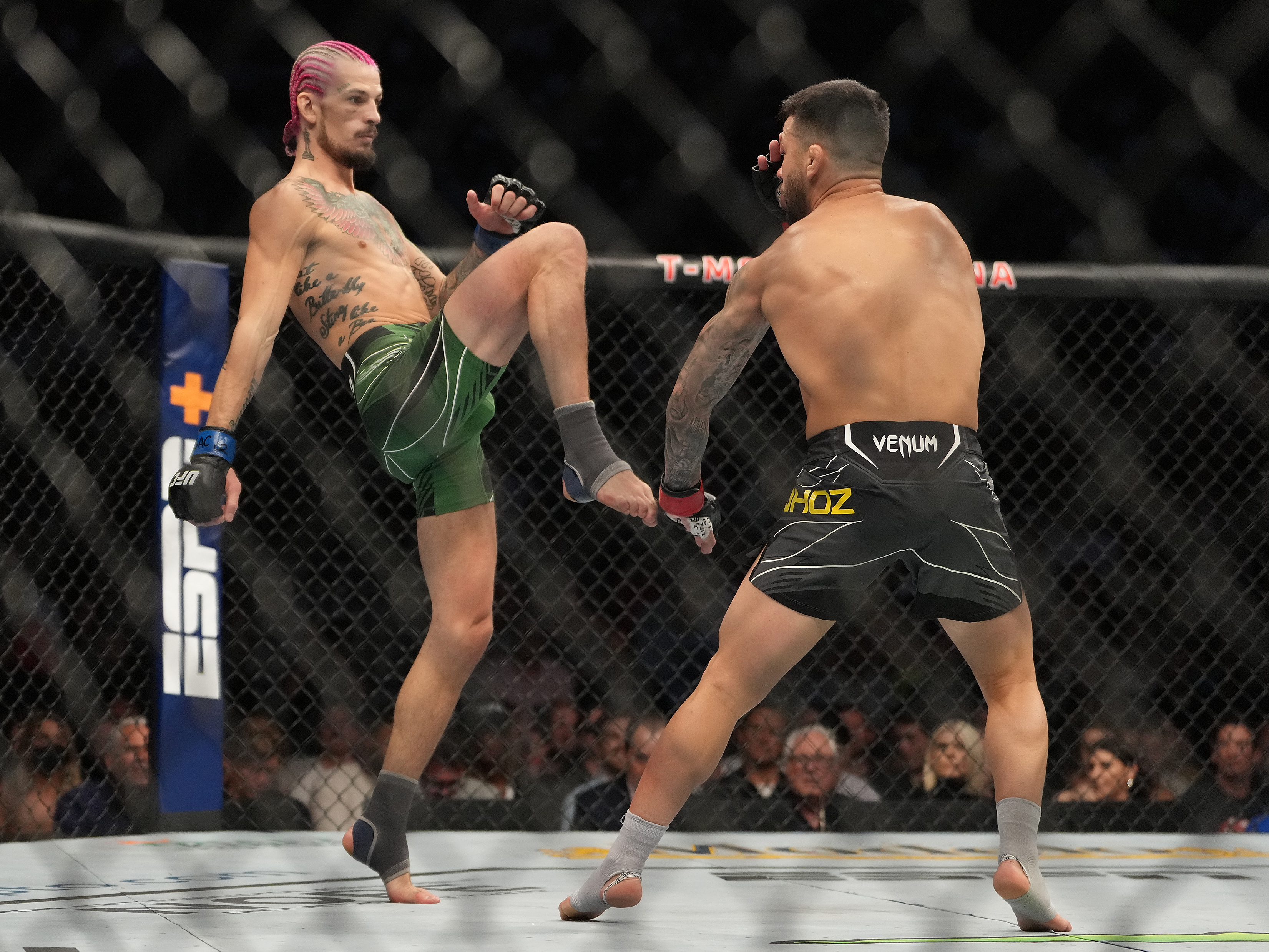 “Mr. ‘Sugar T*ts.’ I think ‘Sugar T*ts’ is full of flavor. He’s got some good style. He likes to wear these colorful things with his hair and things like that, but he’s got some serious skills. He’s talented. ‘Sugar T*ts’ is more of the hammer, we haven’t seen him as a nail yet, when someone actually gives him a little pushback. We’ll see how he’s able to handle some adversity. We saw when he hurt his little leg, he fell down and collapsed, and went nite-nite real quick. I think he’s good, but maybe the hype could be a little bit too much. But we’ll see how he does with a guy like Petr Yan.” 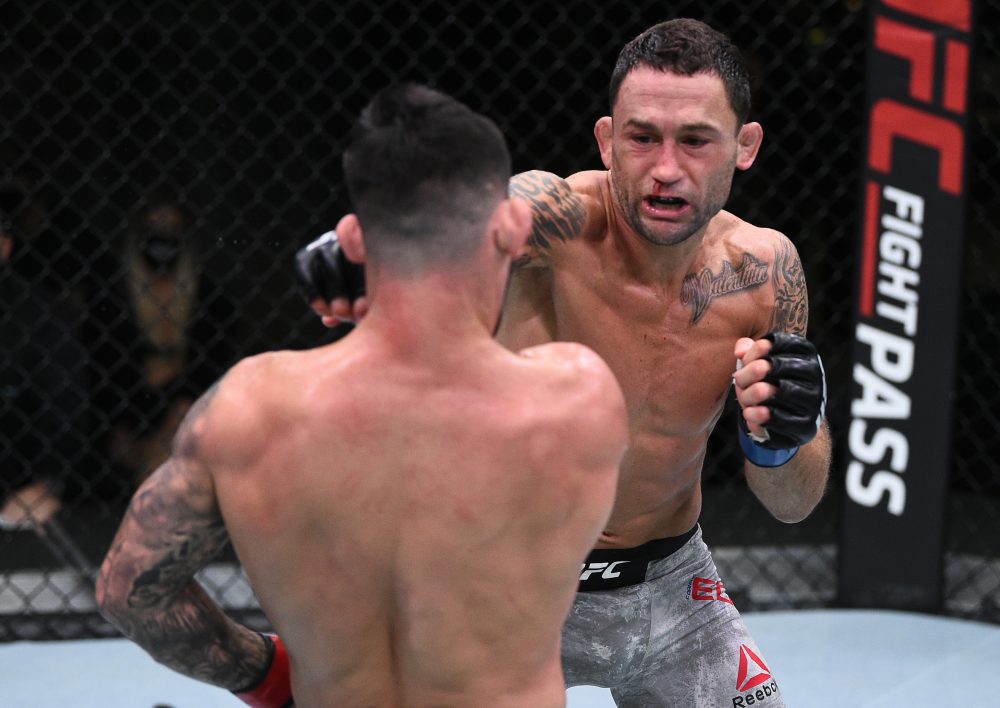 “Frankie Edgar, ‘Mr. Iron,’ I think – a legend. That’s really the best way I can explain a guy like that. He’s done something, one of the little guys in blue who came over to the UFC and was still dominating competition. I look up to a guy like that and he’s one of the guys I mirror my style off of at the early beginning, just to learn from him. Legend of the sport, man. I would love to train with a guy like that.” 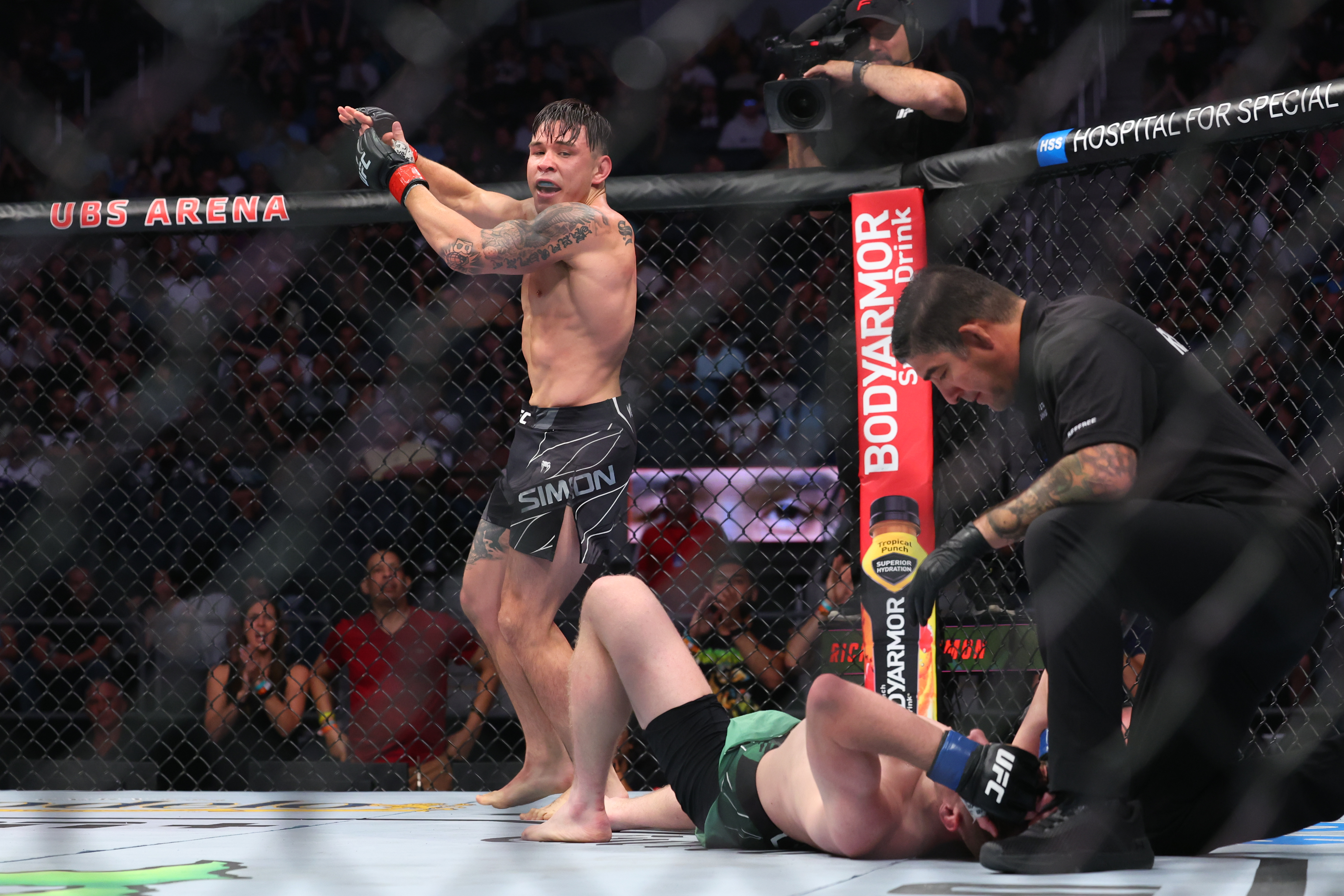 “Ricky Simon’s a super tough dude. I think he really turned a new leaf and really elevated his game when he got rid of that stupid mullet. I feel like that’s what really helped turn it on for him. Like, as soon as he cut the mullet off, it’s like his game just got better exponentially.” 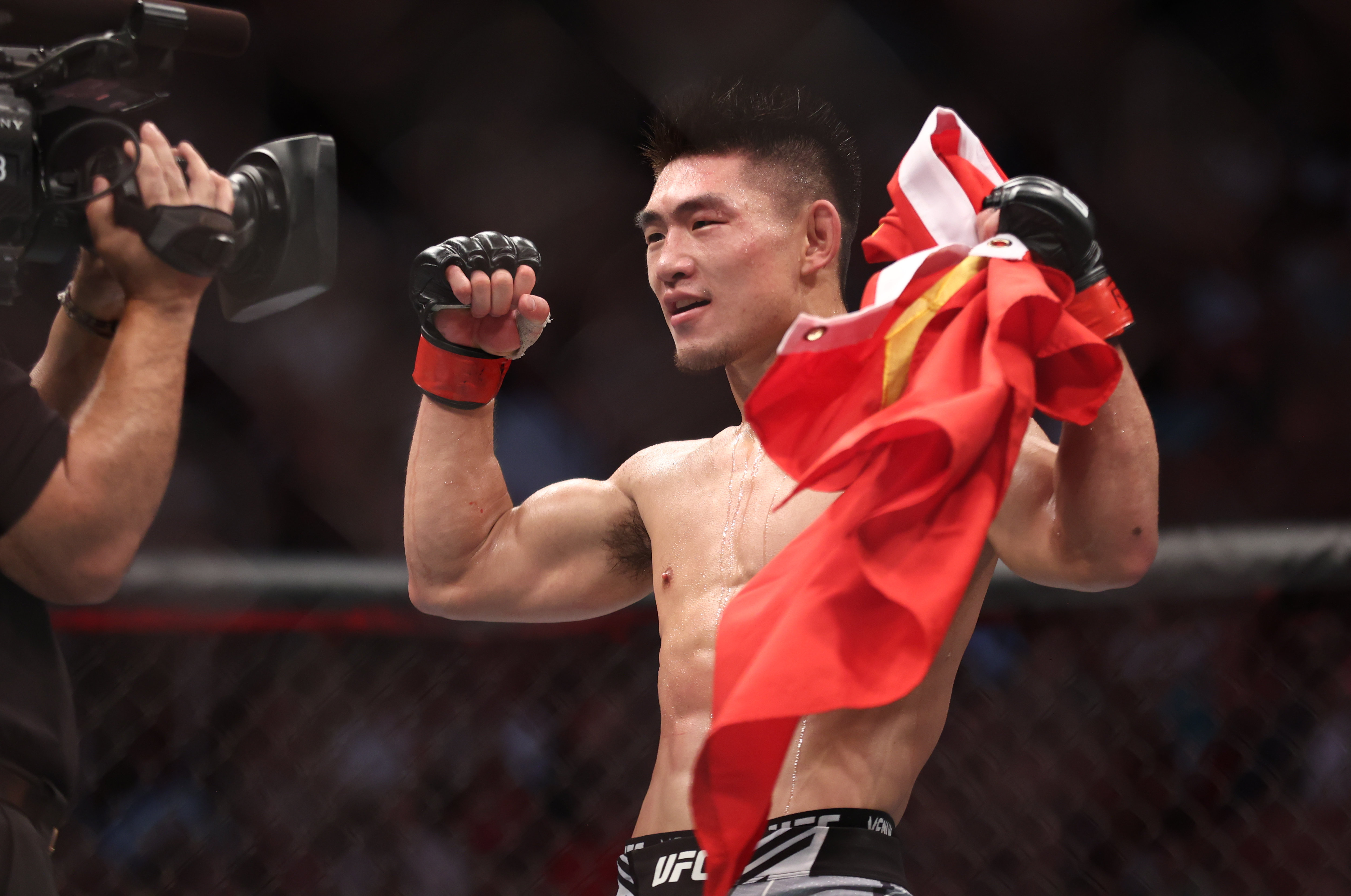 “Yadong, he knocked out Marlon Moraes. It’s like a this point, who hasn’t? This is coming from a guy who’s been knocked out by Marlon. So, I don’t know anything too spectacular about the guy. I think he lost the fight to Cody Stamann, so I’m not really sure how good he is. But, also that could be a testament to how good the bantamweight division is – it’s just that everyone is that close in competitive skills.” 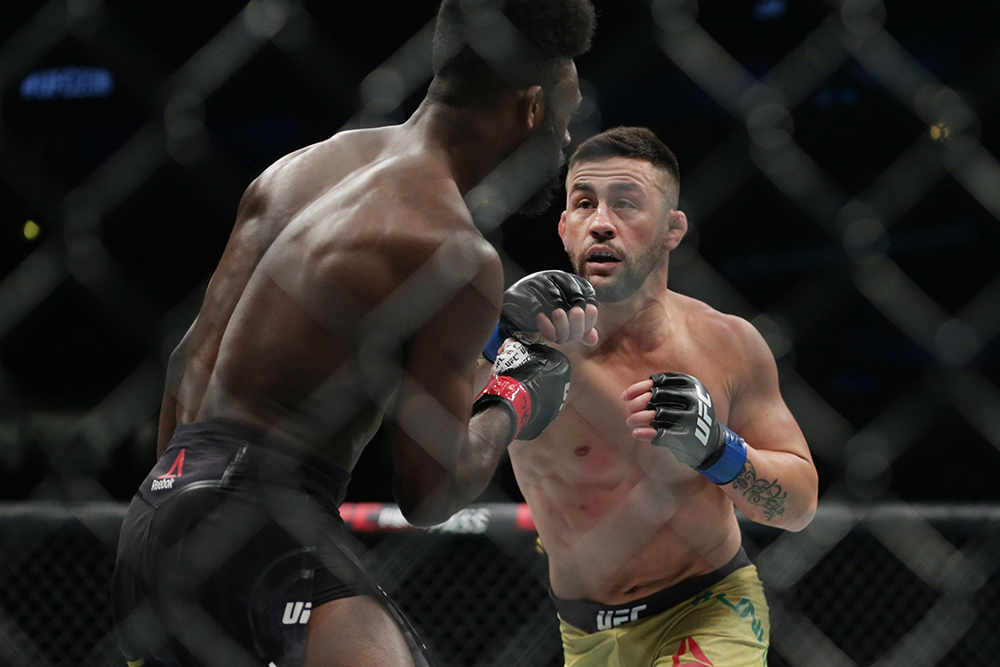 “Pedro Munhoz is one tough dude. You get a guy like that in front of you, just know he ain’t going nowhere. I hit that guy with some sh*t, and he just kept coming forward. I was like, I don’t know what else I gotta hit this motherf*cker with, you know? He was guy I was supposed to train with. We were supposed to train two or three different times and he kind of flaked on me. Pedro, you flaked on me, so I have to expose you on that one. It would have been cool to kind of mix it up. I like training with guys that I fought because we’re probably not going to fight anytime soon. So, it’s good to kind of work with the guys because I truly feel that you can learn a lot from the people you’ve shared the octagon with.” 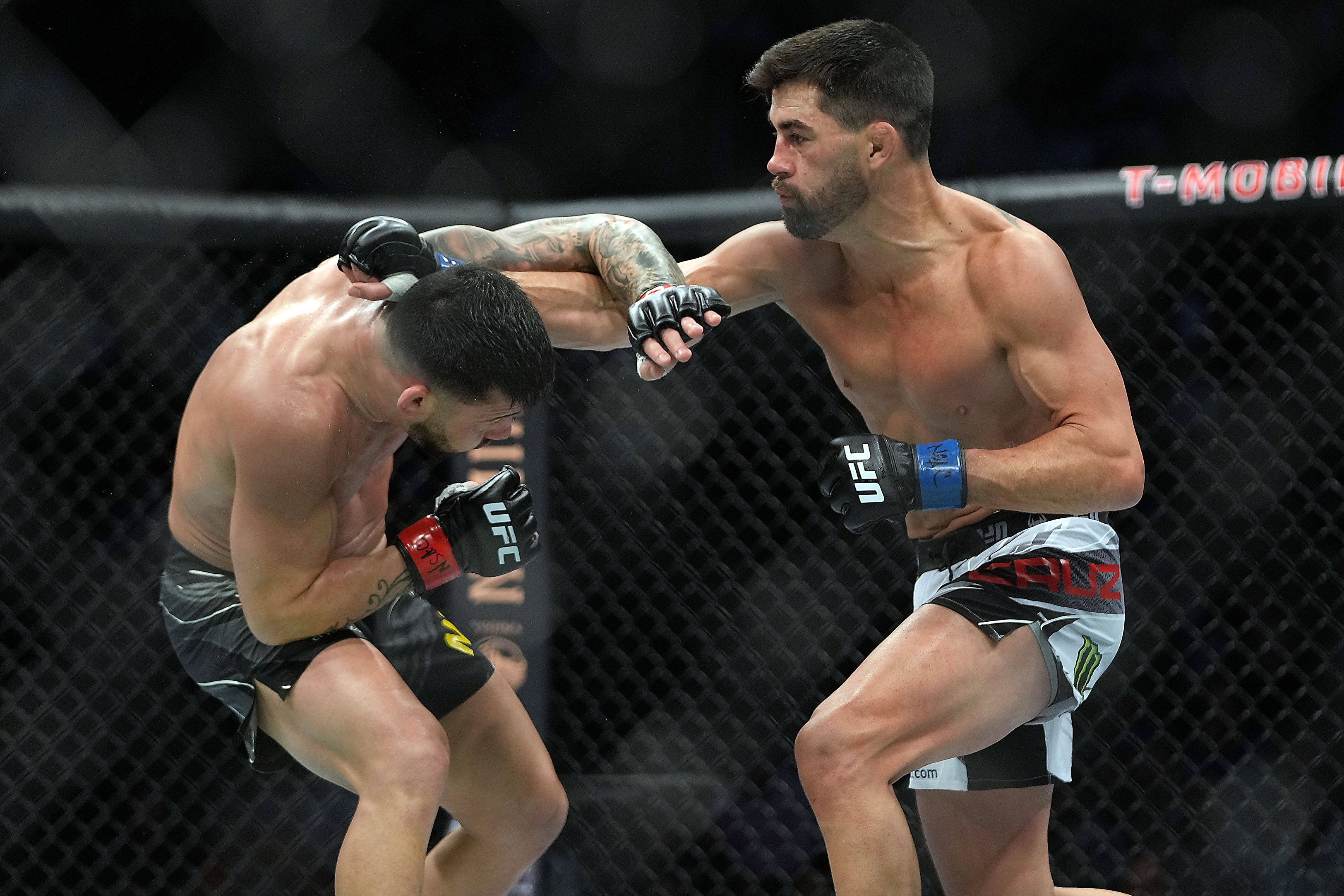 “Dom’s another legend of the sport. When I first watched him on the scene in the WEC, I was super blown away by his skills, and still blown away. Still one of those guys that’s been around each era of the game and can still manage to compete with the best guys in the world. As I kind of started to get up the ranks, he kind of rubbed me the wrong way. He just seemed more arrogant than I thought he was, and that could just be him and his persona, you know? We’re not best friends. I have mutual respect for him, I think he respects what I’ve done and how I’ve been able to battle back. So, it is what it is.” 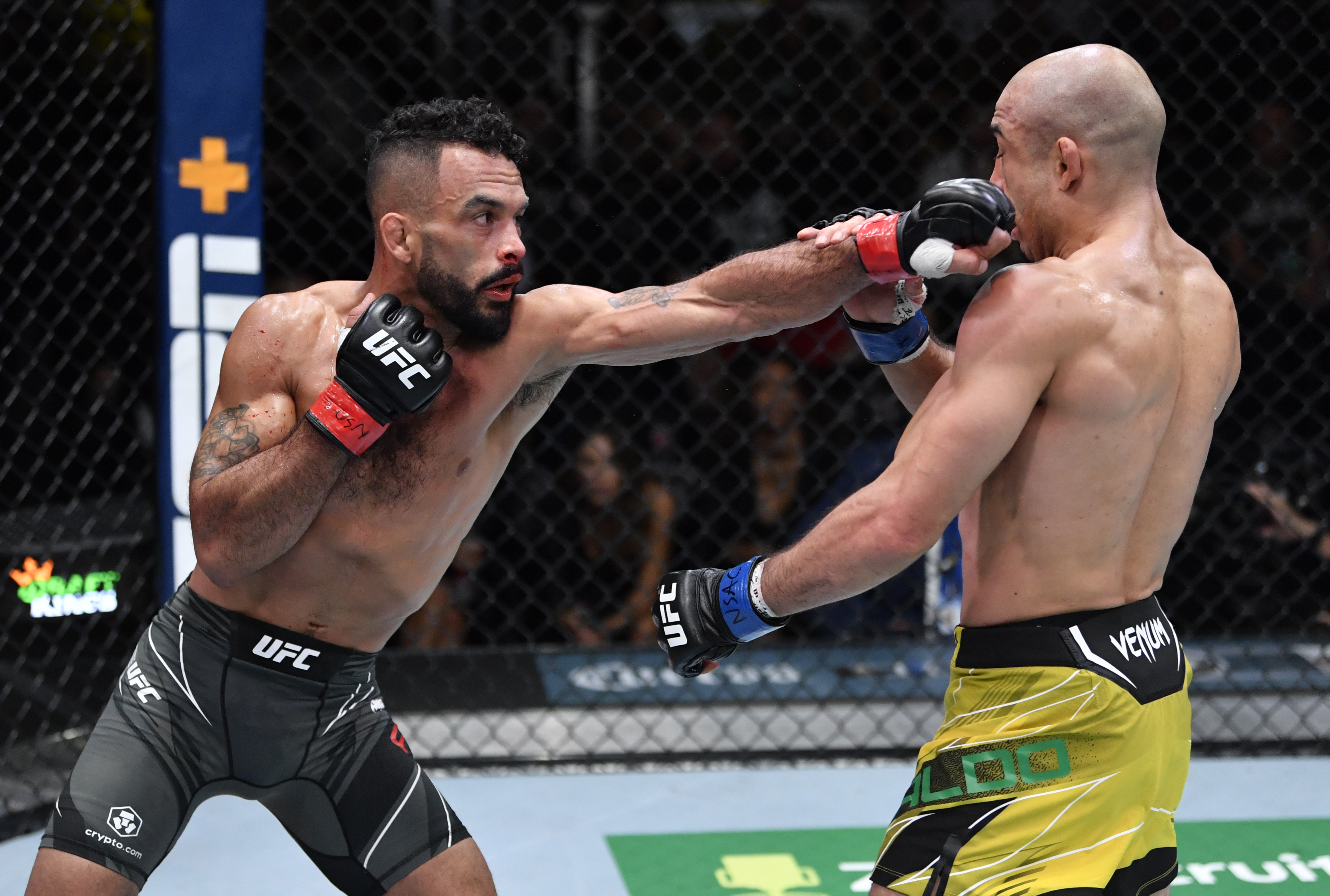 “I think Font’s one of those guys who was unassuming and kind of came back. Some tough losses, so for the most part, for him to battle back and get into the top five, and be maybe be a win away from a title shot against Jose Aldo to come up short – I think is a testament to his skillset. I just think he’s a little one dimensional. I think if he rounds out his game a little bit more, he can get back into that top five picture.” 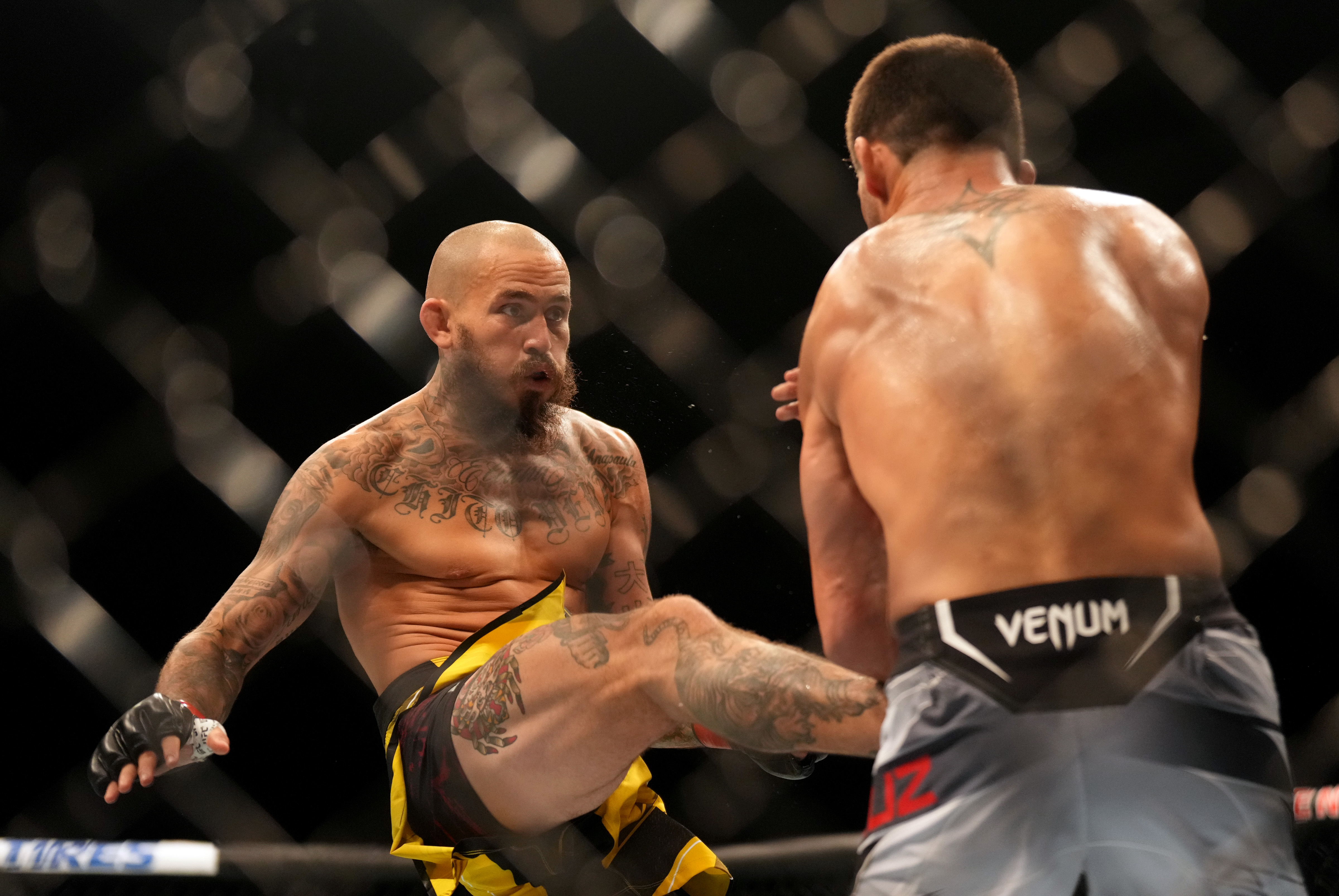 “I think ‘Chito’ Vera’s flipped the switch a little bit. He’s a little bit more mentally tough. I think he’s a motherf*cker, you know? This guy goes out there and he’s going to be there to fight the entire time, and I think that’s what makes him really tough. I don’t think he’s like a specialist per se in any particular area, but I think what makes him dangerous is that he’s a gamer and he’s willing to put it on the line when he steps in that octagon.” 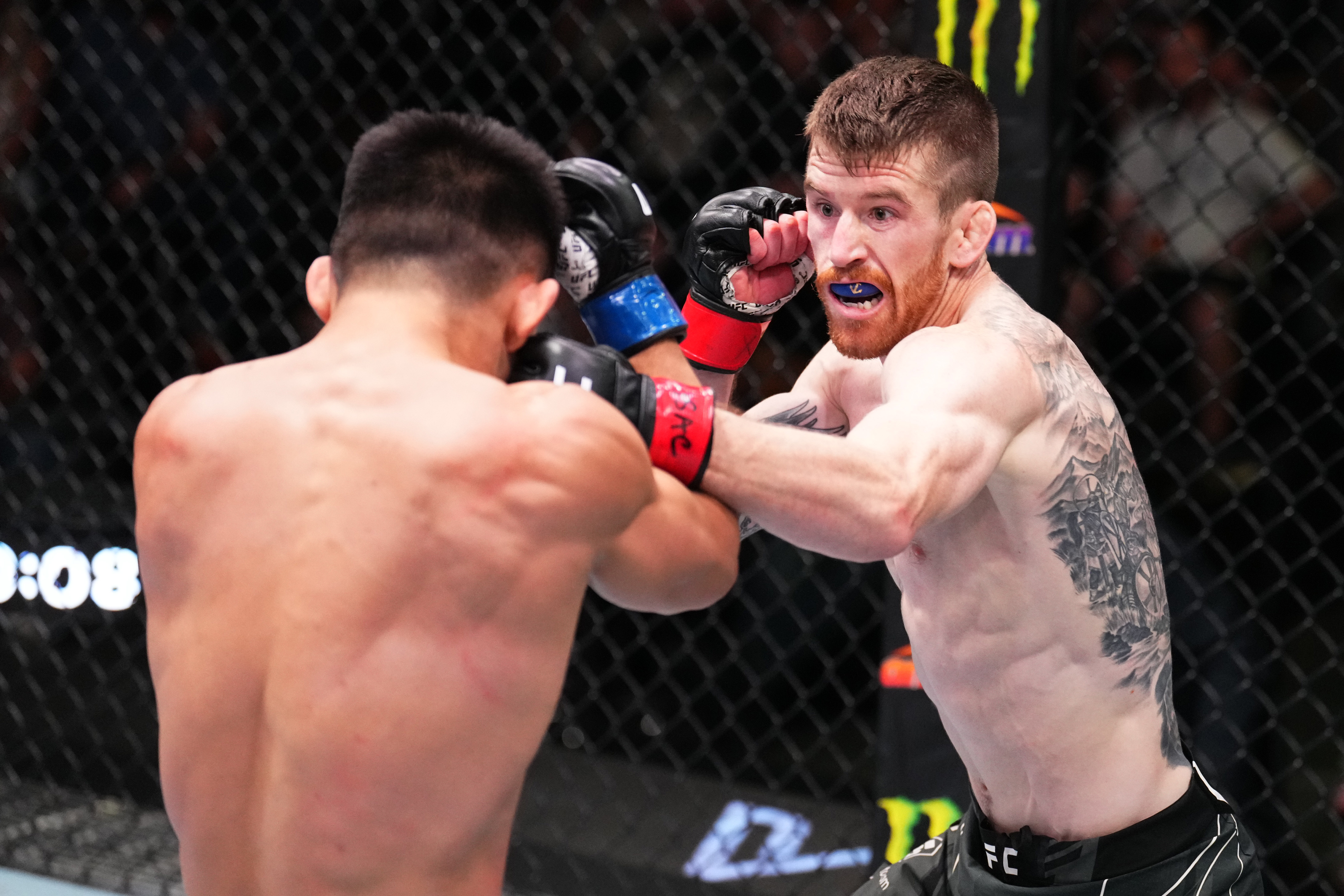 “‘Sandman’ Cory Sandhagen, tough dude. Long, rangy – I do think if he went up to 45, he might have a little bit more success because he has such a long frame. I think he’s going to struggle with guys that wrestle. If it’s going to be a kickboxing fight, we see what he did to T.J. (Dillashaw). I think he still won the fight against T.J. I mean, he pieced him up pretty good, hit him with some sh*t, in comparison to T.J. just hugging him. The guy’s fighting the best guys already; he’s fought me, he’s fought Edgar. Another one of my kids. So, I think I kind of awakened a new beast inside of him after that loss. Sometimes you need that, you know? Marlon Moraes did that to me, and I’m  proud to say I did it for Cory Sandhagen.” 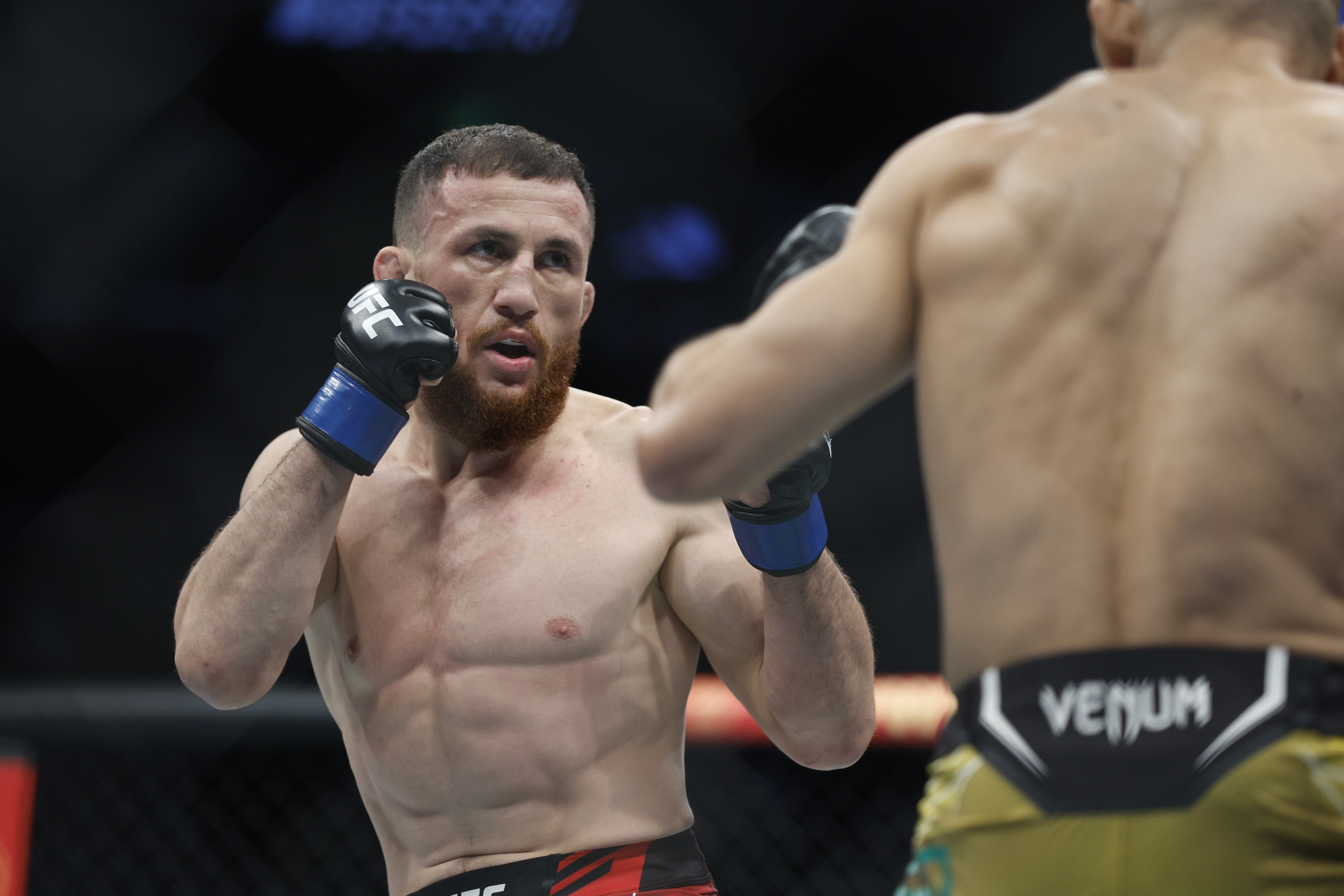 “Merab ‘The Machine,’ I think it’s self-explanatory. There’s not much more I need to say about that. I just left the training room recording his sparring session and this guy is just a bulldozer, a juggernaut. Just runs through people. He will literally shoot 20-something times. He’ll take you down 20 times, and he’ll let you up just so he can take you down again and dump you on your ass. Then, he’ll just be right there in the center of the octagon, bouncing around, and you’re just looking at this guy like how are you not getting tired? Energizer bunny, man. This guy’s fun to watch. Non-stop action, and I’m super excited for him.” 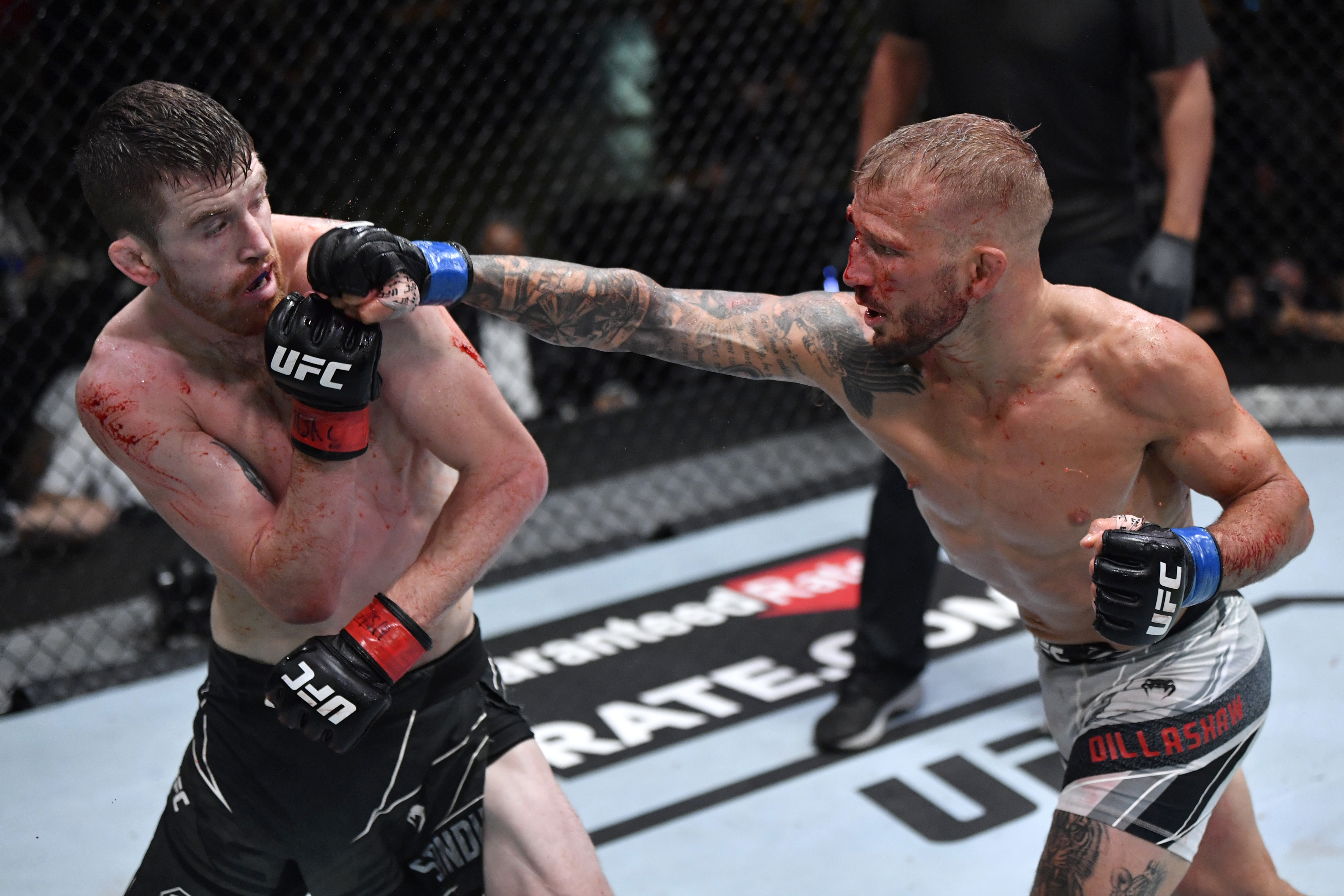 “The new ‘CEO of EPO’ is Mr. T.J. ‘Dilla-roids.’ I think he’s a tough dude. I don’t think he’s done anything in his career fairly. I really do think he’s cheated for just about all of his career. I mean, his teammates are whistleblowers when he was over there teaching people to do what he was doing. I respect his skillset, I respect what you’ve done in the sport, but guess what? The backpack is coming, and I’m coming for that ass.” 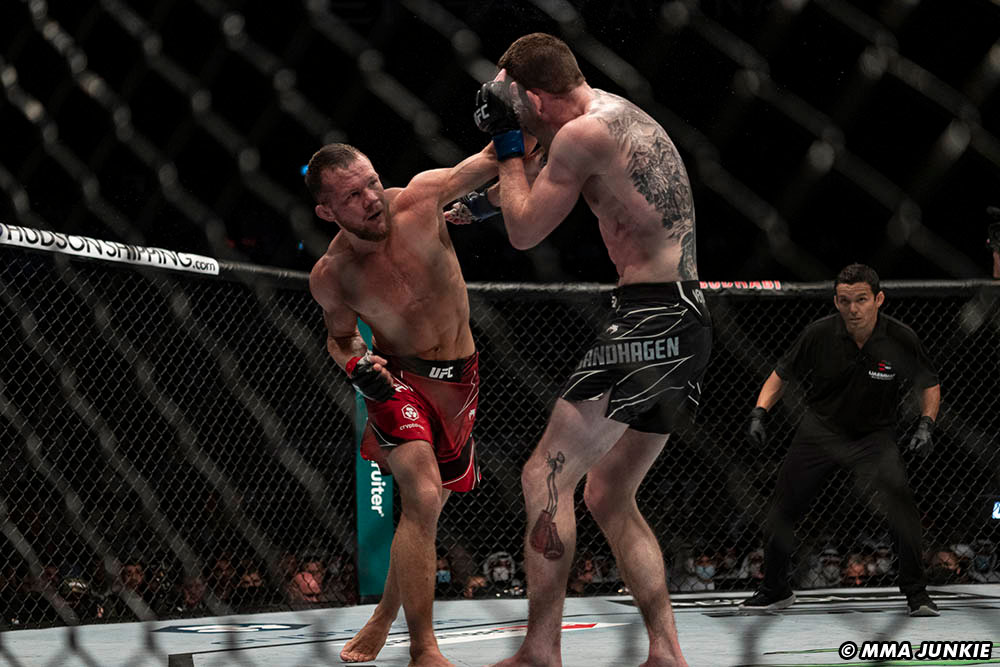 “Petr Yan, I think he’s the real deal. I think he made his adjustments from the first fight, because I truly do believe if I didn’t have that hiccup in my rehydration process, that first fight, I would have finished him in the first round when I took him down that easily. I truly do believe that. People can say whatever they want to say, but I know what I’ve done in the training room and I don’t think his defense was as tight as it was then, as it became when we had the rematch. I think he’s a smart, intellectual fighter. He’s dangerous, but I think he struggles with guys who have really good footwork and can avoid his shots, and have a little bit of a rangier reach on him. So, that’s all I can really say about him. I think he’s gonna be around for a while. I think we’re gonna potentially fight for a third time, maybe even a fourth.” 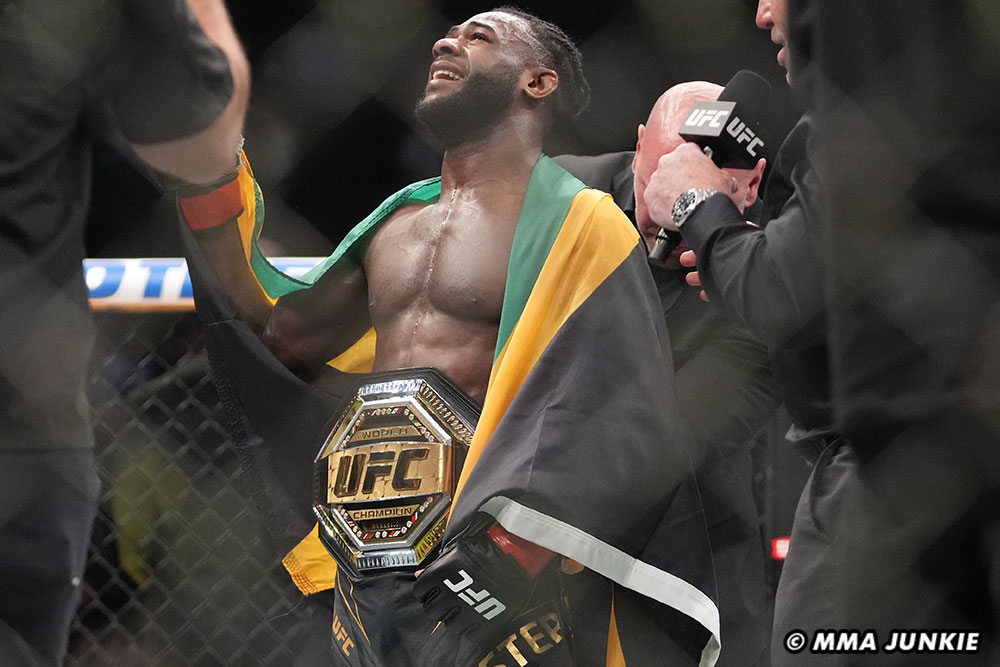 “The champ, I just think he’s a calculated, smart fighter. Does his homework, does his research. Gives respect to everybody he steps in there – the one time I didn’t give respect was to Marlon Moraes and I ended up looking at the lights being woken up in a hospital, coming to in a hospital. So that whole recollection from the knee to the transportation to the hospital, waking up in the bed, all blank. All completely gone. Learned my lesson the hard way. It’s not like the lessons I gave some of these other guys, but it’s still a way to learn it. Battled back from adversity and I think if I could show one thing to anybody it’s that never let people dictate your future, and always bet on yourself.”