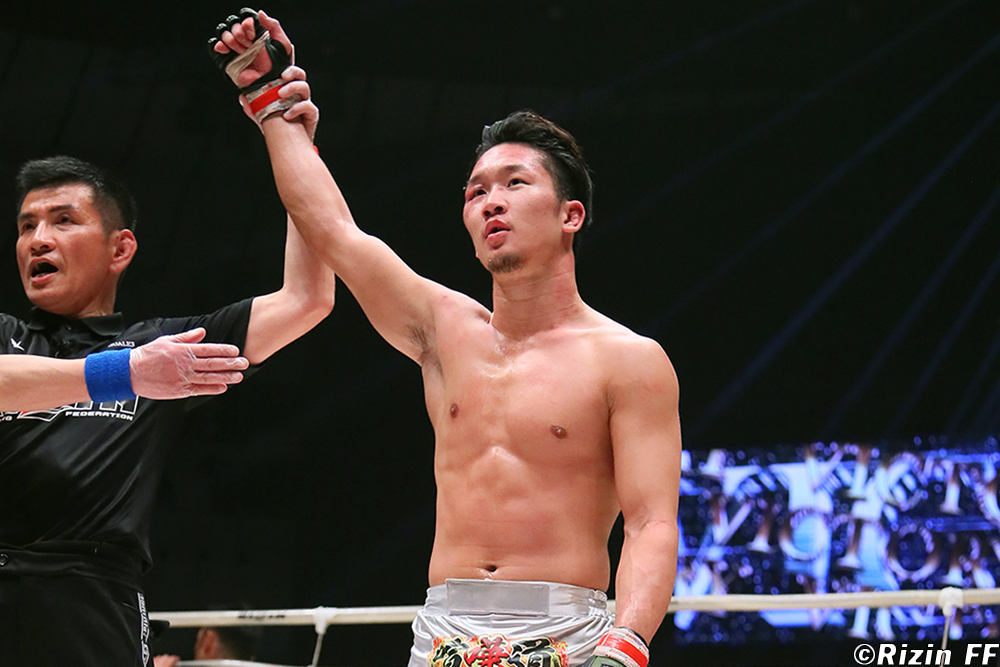 The Rizin FF ring lands in Osaka, Japan, with the promotion’s featherweight title up for grabs in the main event.

The 145-pound strap will be contested between two explosive contenders as Mikuru Asakura (13-1), brother of current Rizin FF bantamweight champion Kai, will look to add a second title to the family collection when he takes on former two-time Shooto featherweight champion Yutaka Saito (18-4-2).

The fight card in Japan features six MMA bouts in total, with bantamweight contenders Hiromasa Ogikubo (20-5-2) and Kenta Takizawa (11-5) set to face off in the co-main event looking to earn a shot at the title in 2021, while former ONE lightweight champion Kotetsu Boku (26-15-2) returns to action against Rikuto Shirakawa (8-8-1).

Rizin FF 25 takes place Saturday, Nov. 21 at Osaka-Jo Hall in Osaka, Japan. The event streams live via online pay-per-view. Stay up to date with our live results below.

Ogikubo battles to victory to stay in the bantamweight title picture

In the night’s co-main event, former bantamweight title challenger Hiromasa Ogikubo had to come from behind to defeat Kenta Takizawa to keep his name in the mix for a shot at the 135-pound strap in 2021.

Takizawa (11-6) started the faster of the two and put his superior reach to good use as he employed a kick-heavy approach before stepping in and landing with vicious shots to the head and body of Ogikubo (21-5-2), who initially seemed a little gun-shy after his soccer-kick KO loss to Kai Asakura in their bantamweight title clash in August.

Ogikubo looked to open up a little more at the start of Round 2 as he chopped away at Takizawa’s legs and stepped in with follow-up punches. He also succeeded in closing the distance and initiating the clinch in the corner, but he was unable to get the taller man down to the canvas. Takizawa attempted to continue his long-range attack, but Ogikubo’s controlled pressure and higher striking output brought him back into the fight to leave things wide open heading into Round 3.

With both men enjoying periods of success through the first two rounds, the pair knew they needed a fast start in the final frame, and Ogikubo made the crucial breakthrough. He dropped Takizawa with a perfectly-timed head kick, then followed his man to the mat, moved into half-guard and went to work from the top. When Tamizawa attempted to stand back up, Ogikubo transitioned to the back and dragged his man to the mat again.

Tamizawa managed to spin out of Ogikubo’s back mount, but the former title challenger seemed happy to work from guard as he held his man down and attempted to pass, while landing the occasional strike to prevent the referee from standing them up. Eventually, after a wild scramble on the mat, the pair returned to their feet for the final seconds as they swung wildly in a desperate final attempt to claim a last-gasp knockout.

The bout made it all the way to the final bell, however, with Ogikubo picking up the unanimous decision from the three ringside judges to potentially put himself in the frame for another shot at the bantamweight title, which will be contested at Rizin FF 26 when newly crowned champion Kai Asakura welcomes back former champion Kyoji Horiguchi on Dec. 31. 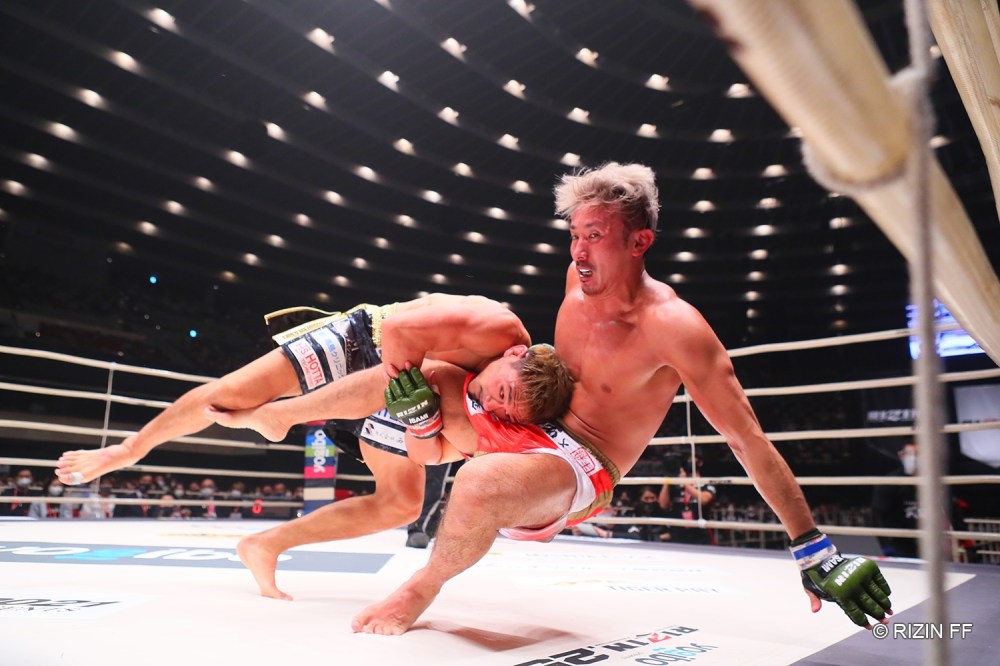 Sumimura’s previous appearance for the promotion saw him submitted in the first round by Kiichi Kunimoto at Rizin FF 12 in 2018, but since that setback, he captured the Deep 170-pound title to earn a second chance with Rizin, and he took that chance by earning the nod from the judges after a closely contested matchup.

The bout started in cagey fashion, with both men seemingly respectful of the other’s power. Yamashita (14-10-1) looked the more flamboyant striker as he looked to connect with single, flashy strikes, while Sumimura (16-8), fighting with his left shoulder heavily strapped, kept his distance and attempted to walk his man onto his straight right.

With 90 seconds to go in the round, the bout exploded into life when Sumimura stepped into the pocket and both men unleashed a wild flurry of fists that ended with Sumimura clinching and forcing Yamashita into the corner.

Sumimura changed tack at the start of Round 2 and turned to his wrestling as he caught a head-kick attempt and took Yamashita to the canvas. The action soon returned to the feet, however, and Yamashita returned to his flashy southpaw style, but his flying knee attempt was easily dodged by Sumimura as the pair largely canceled each other out on the feet.

The fight was hanging in the balance heading into the final frame, and both men upped the intensity in the opening seconds of the round, with Yamashita connecting with a solid head kick before the pair traded big punches in the center of the ring. The pace soon dropped, though, and the stand-up exchanges featured more parries than punches as both men carefully looked for an opening.

Eventually, Sumimura stepped in and took Yamashita to the mat. Working from half-guard, he connected with punches and elbows from the top. The activity wasn’t enough for the referee, who stood the pair back up, but as soon as the action resumed, Sumimura took the bout to the canvas once again as the fight went all the way to the scorecards.

After three rounds that promised much, but never quite caught fire, the judges rendered their decision, with Yamashita nodding in agreement as Sumimura was awarded the split-decision victory.

Ground control the key as Saomoto edges past Kitakata 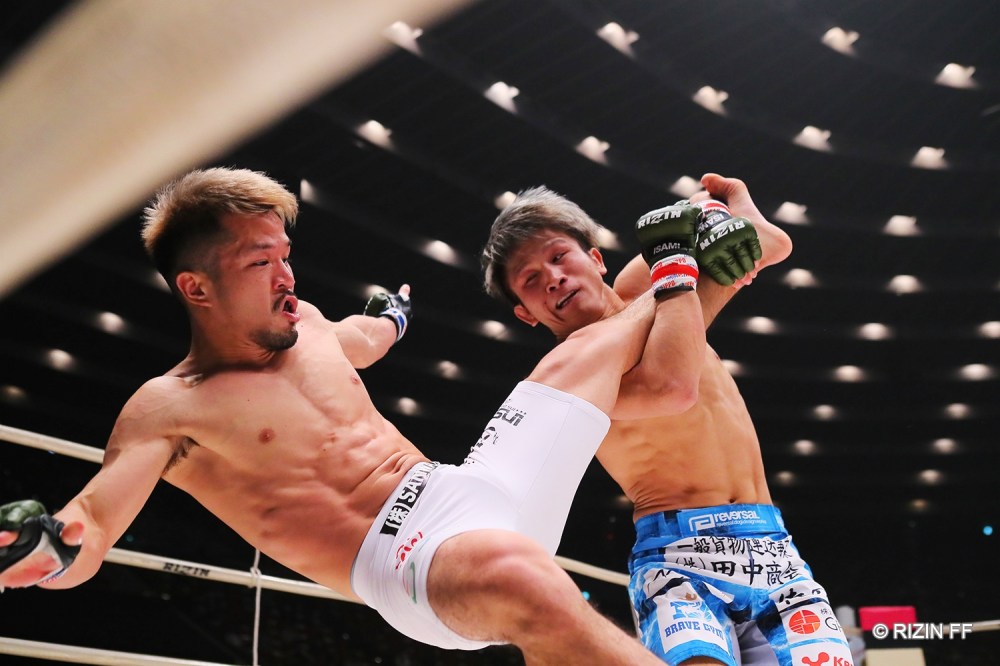 It was striker versus wrestler at flyweight as strawweight King of Pancrase Daichi Kitakata took on Tatsuki Saomoto, and the contrast in styles was evident throughout the matchup, with both men holding significant advantages over the other in their respective realms. In the end, wrestling held sway over striking as Saomoto (16-3) claimed a decision win after their back-and-forth battle went all the way to the scorecards.

Kitakata (20-10-1) opened up looking comfortable on the feet as he settled into his striking and found a home for his punches early. But Saomoto soon closed the distance and dragged the action to the canvas as he looked to make his ground game pay. However, Kitakata defended well, and punished his man with knees to the head as Saomoto doggedly pursued a single-leg takedown.

Round 2 saw a repeat of the first, with Kitakata holding the early advantage on the feet before Saomoto took the action to the mat. However, once he had landed his takedown, the 24-year-old was unable to mount much offense before the action eventually returned to the feet.

With the pace of the fight slowing, the final round saw both men load up on their strikes before, once again, Saomoto switched from striking to wrestling to take Kitakata to the mat. Kitakata controlled Saomoto from his back with guillotine choke attempts and was eventually able to kick himself free as the action returned to the center of the ring again.

Kitakata managed to connect with a couple of solid punches before being forced to play defense again, as Saomoto relentlessly pursued, and eventually secured, another takedown. As before, Kitakata used a guillotine to prevent Saomoto from posturing up, and his stalling tactic led to the fight being stood up for the final 30 seconds.

After a highly competitive encounter, the judges saw Saomoto’s ability to control where the fight played out as the key factor in the bout as they rendered a unanimous decision and extended the 24-year-old contender’s winning streak to 12, a run that stretches back to September 2016, when he was still a teenager. 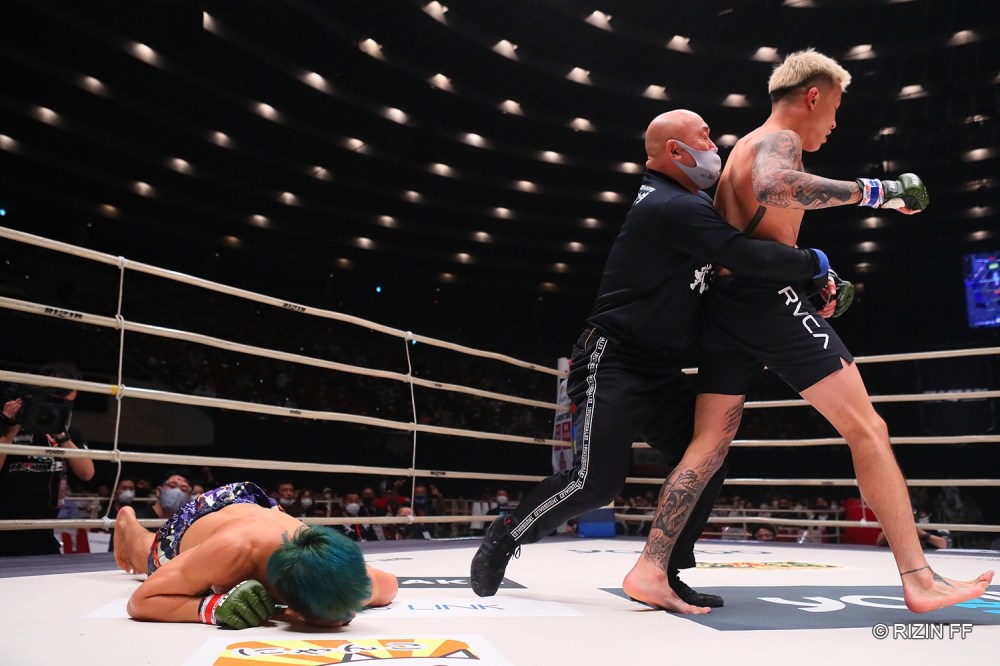 The old adage says that you don’t get paid for overtime in combat sports, and Kyohei Hagiwara wasted no time whatsoever as he knocked out Yojiro Uchimura in swift fashion before lighting up an imaginary cigar on the winner’s cushion after the fight.

The pair both charged to the center of the ring at the opening bell and let fly with strikes in a breathless start to the fight. But it was mere seconds into the first round that Hagiwara (2-3) made his power tell as he connected with a huge right hand that sent Uchimura (17-14-3) face-planting into the canvas.

Hagiwara than delivered an unnecessary (but legal in Rizin) foot stomp to the head of his already scrambled opponent as the referee dived in to end the bout. As Hagiwara nonchalantly walked off, Uchimura ill-advisedly attempted to get back to his feet, only to fall face-first back into the canvas once again.

The official fight time was just 22 seconds, as 24-year-old Hagiwara claimed the second win, and second knockout victory, of his young MMA career. 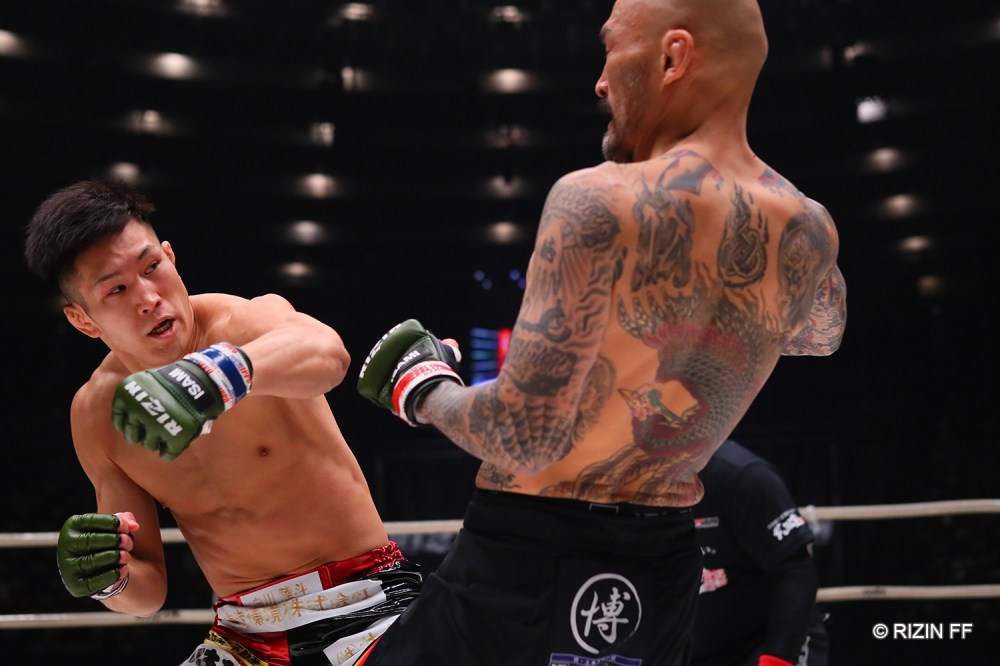 After a pair of kickboxing matches opened proceedings in Osaka, the first MMA bout of the night saw 43-year-old former ONE lightweight champion Kotetsu Boku face 29-year-old Rikuto Shirakawa in a matchup that was contested almost exclusively on the feet, and it was the younger man who prevailed with an eye-catching knockout in the bout’s closing seconds.

Round 1 saw Boku (26-16-2) look to maintain the center of the ring, but it was Shirakawa (9-8-1) who was the aggressor as he blitzed in and out with heavy strikes, targeting the head and body of the veteran. Boku, for his part, seemed content to pace himself and work behind his jab. But, other than some chopping leg kicks, he didn’t offer too much else in the way of follow-up strikes.

Boku upped his output at the start of Round 2 as he introduced his right hand behind his solid jab, while continuing to work his leg kicks. Shirakawa, meanwhile, appeared to throw with greater venum, but at times seemed a little hesitant to let his shots go. When he did, he scored well, particularly with the left hook to the body.

Despite being 14 years his opponent’s elder, Boku was the man pushing the pace as the round came to an end, and “No Face” finished the frame with a thumping body shot that left the younger man to take a deep breath at the end of the round.

Both men traded body shots as Round 3 got underway, as the two fighters looked to sap each other’s gas tank, but the decisive moment in the fight came when Shirakawa stepped up and switched his target to the head. He dropped Boku with a solid right hand, then followed him to the mat and landed in the veteran’s guard. But a combination of fatigue and, perhaps, respect for Boku’s ground game meant that Shirakawa offered little offense from top position and the fight was stood up by the referee with one minute of the bout remaining.

The pair swung for the fences in the final 60 seconds, and Shirakawa dropped Boku once again with another big right. This time, instead of following him to the mat, he unleashed a soccer kick to the downed veteran to close the show and claim a last-gasp knockout victory.

Boku’s defeat extended his winless run to five, with his last victory coming back in December 2017 in ONE Championship. Shirakawa, meanwhile, took his career above the .500 mark by registering his second straight win of 2020, and his first under the Rizin FF banner, as he claimed the biggest-name win of his career.