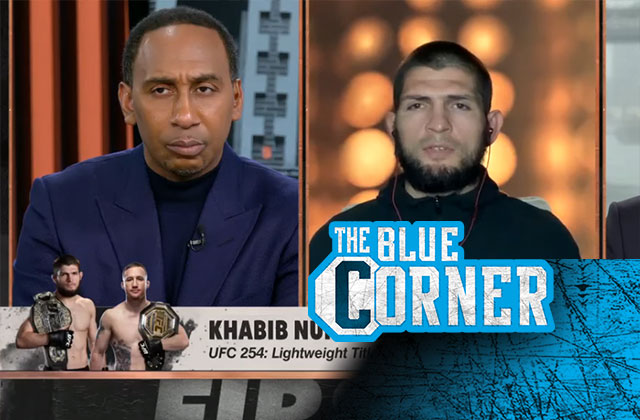 On ESPN’s “First Take” on Tuesday, Khabib Nurmagomedov made that clear and showed once again his ability to cut straight to the chase with as few words as possible.

Ahead of his UFC 254 title defense Saturday against Justin Gaethje, Nurmagomedov (28-0 MMA, 12-0 UFC) was a guest on the show, speaking with hosts Stephen A. Smith and Max Kellerman.

Like many of Nurmagomedov’s interviews these days, the conversation shifted to the topic of his bitter rival and former opponent, McGregor. Smith took his time with a follow-up question, enthusiastically flowering up his language as he always does before getting to the point.

“A lot of times, particularly in the fight game, you talk about giving the people what they want to see,” Smith said. “One of the things I said last week talking about you, sir, was that you really, really don’t want to fight somebody like Conor McGregor again – primarily because you don’t like him and you think fighting him again gives him attention that you don’t believe he deserves. How accurate is that?”

Without skipping a beat, Nurmagomedov responded in a brutally honest fashion:

“Right now, even I don’t want to talk about this (expletive).”

So, yeah, maybe one McGregor-related question per Nurmagomedov interview is the limit. Noted.

The audio aired on the live broadcast before being censored later for social media. Check out the exchange in the video below:

“Right now, I don’t even want to talk about this s—.”@TeamKhabib is focused on fighting Justin Gaethje at #UFC254 and nobody else 😶 (via @FirstTake) pic.twitter.com/XGzJFUanl3