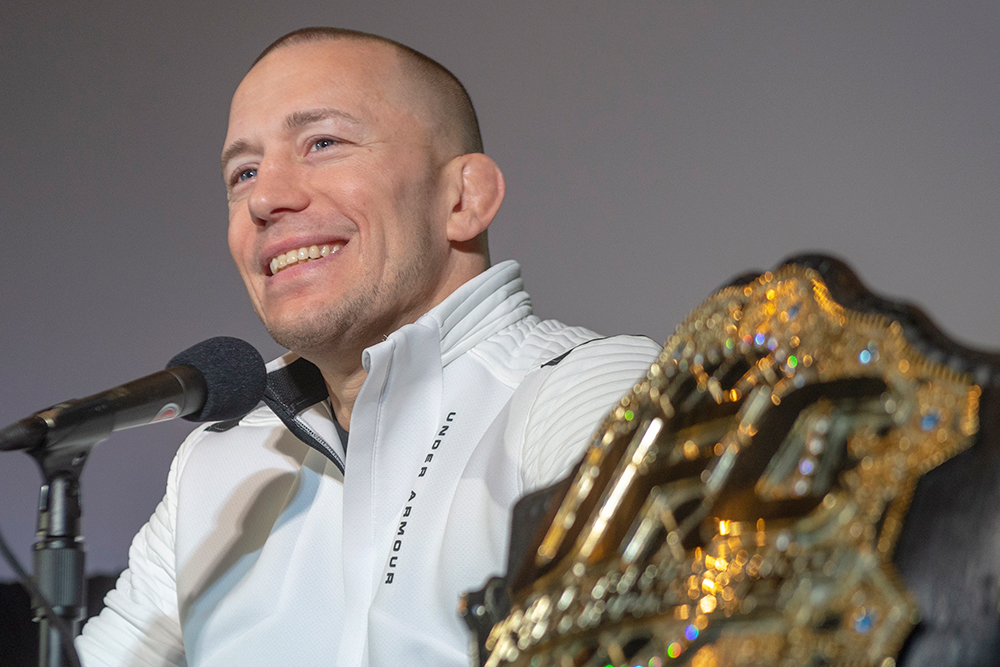 Many viewers were caught off-guard when UFC lightweight champion Khabib Nurmagomedov took off his gloves and placed them in the center of the cage Saturday after defeating Justin Gaethje at UFC 254.

Among them was former UFC welterweight champion and UFC middleweight champion, Georges St-Pierre, who was watching closely as part of the UFC’s French broadcast team.

Nurmagomedov (29-0 MMA, 13-0 UFC) and St-Pierre have been long linked to a potential super fight with both fighters expressing varying levels of interest these past few years.

Thirty was dubbed by many as the “magic number” for Nurmagomedov’s career. An idea floated in recent weeks held that the Russian champion, should he beat Gaethje to reach 29-0, would fight St-Pierre to try to reach the 30-0 milestone.

St-Pierre was interviewed by various outlets in the lead-up to UFC 254 and had become a side narrative of the fight’s buildup. Despite admitting he would’ve considered ending his own retirement, St-Pierre is happy that Nurmagomedov made the decision that was best for him.

“… I always see an athlete taking too many fights. … That’s something I really don’t wish (on) someone. Khabib did an amazing decision (to retire). Like everything in life, everything has a beginning and has an end. The life of a professional athlete, even an elite athlete, has a window. If we fight past that window, that’s when the problems arrive and appear.”

When asked what message he had for Nurmagomedov, a fighter whom he falls alongside on a short list of UFC champions with minimal-to-no blemishes on their record, St-Pierre gave a heartfelt response.

“Khabib, follow your heart,” St-Pierre said. “Follow what makes you happy and what makes people who love (you) happy. No pressure. Take the right decision at the right time, and the possibilities for you are limitless. You can do whatever you want. Congratulations. What an amazing career. Man, it was a perfect fight and a perfect career that you have.”

So what’s next for GSP? The 39-year-old former champion said for now, he’s comfortable being retired – but never say never. Things could change.

“I retired three years ago,” St-Pierre said. “It’s only people who speculate about it. For me, I’m happy with where I am, you know what I mean? You’d never say never in life. … I have a different mentality than certain other people. For some people, it’s white or black. For me, it’s always gray in my life. I don’t believe there are things that are not tangible. There’s all possibility. I’ll leave the door open but for now, it’s not. I retired three years ago and I’m good where I am.”

Photos: Georges St-Pierre through the years