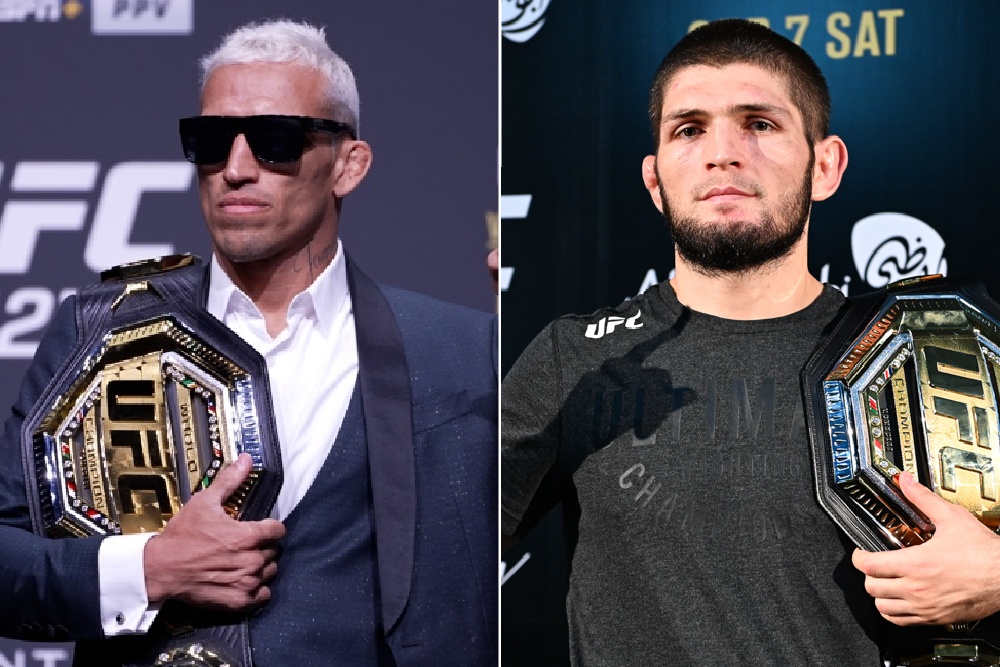 Daniel Cormier wonders if a Charles Oliveira victory over the surging Islam Makhachev could bring set up a scenario where Khabib Nurmagomedov returns to the UFC.

Oliveira (33-8 MMA, 21-8 UFC) was stripped of his lightweight title after missing weight for his UFC 274 fight against Justin Gaethje, but wound up winning by submission in Round 1.

As a result, Oliveira’s next fight will be for the vacant belt, and Makhachev (22-1 MMA, 11-1 UFC)  has been campaigning to face him.

During a current 11-fight winning streak, Oliveira has finished Michael Chandler, Dustin Poirier, and Gaethje. His resume is generating discussion about whether he’s the greatest lightweight in UFC history, a label which many believe currently belongs to Nurmagomedov (29-9 MMA, 13-0 UFC).

Although Nurmagomedov never lost in MMA competition prior to his retirement in October 2020, it seems Brazil’s Oliveira has a skillset that could seriously challenge the future UFC Hall of Famer. Cormier, who is longtime friend and training partner of Nurmagomedov, wonders if an Oliveira victory over Nurmagomedov’s protege Makhachev, could be enough to pull “The Eagle” out of retirement.

“Man, it’ll be nice to see him (Oliveira) fight Khabib, right?,” Cormier said on his ESPN show “DC & RC.” “Many people have said that, ‘It’ll be nice to know, it’ll be nice to know.’ What better way to try to draw him back in than by having Oliveira beat his friend, training partner and long time – it’s another way to try to draw him in because obviously the money, Dana’s throwing so much money at Khabib to try to get him back, that hasn’t been enough. But what if defending his friend’s honor is enough, if Islam doesn’t get the job done?”

Makhachev is currently on a 10-fight winning streak and has been linked to a bout with Beneil Dariush for months. But with Dariush currently healing from an ankle injury which forced him out of their UFC Fight Night 202 headliner in February, Makhachev is eager to compete for the belt against Oliveira right away and Cormier thinks his resume warrants that opportunity.

“When it’s based on merit and you look at what he’s done, 10 fights in a row, beating Dan Hooker in the way that he did…everybody that he’s fought, he’s dominated and when we look at Charles Oliveira today, whoever Charles Oliveira is fighting he is dominating,” Cormier said. “So we want to see the best lightweights in the world fight each other, and I understand that he had one more step to cross in terms of Beneil Dariush, (but) Beneil Dariush is hurt right now.