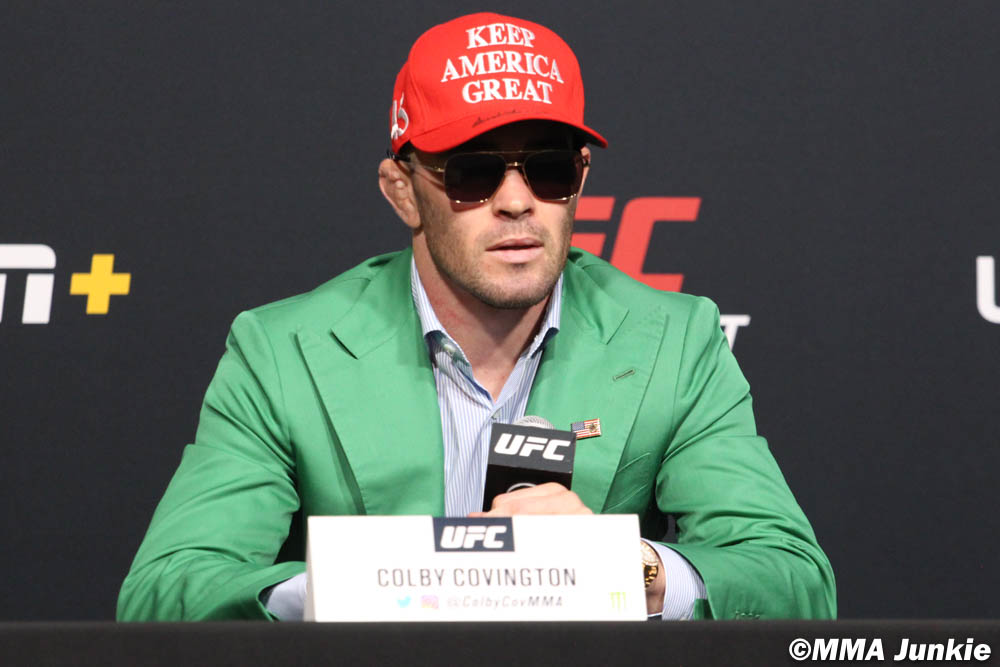 LAS VEGAS – Colby Covington wasted little time rattling off all the reasons why his UFC on ESPN+ 36 main event against Tyron Woodley is an easy fight to market. They’re the same reasons the UFC saw fit to keep the duo apart during Thursday’s pre-fight news conference.

“Animosity. You’ve got two guys who want to take each other’s heads off,” Covington told reporters, including MMA Junkie. “You’ve got red vs. blue. You’ve got me capitalism vs. him communism. You’ve got MAGA vs. maggots. This is a heated rivalry.”

This fight has been talked about for quite some time, dating back to when Woodley held the welterweight title, and it started becoming apparent that Covington could back his out-of-the-cage gimmick with superlative skills on fight night. It just turned out Woodley lost his belt before the fight could get made, and Covington instead lost to current champion Kamaru Usman, making this fight all the more urgent for both.

Woodley has spent time training with Covington’s former teammate, Jorge Masvidal, but Covington insists the only thing he learned from Masvidal is how to lose.

“I thought that was a great game plan for Tyron Woodley, to train with a guy I used to beat up every day so he could learn how to lose to me,” Covington said. “The only thing they game plan is how they’re going to make their alimony payments. I compare him to the Tin Man; he has no heart. So I just knew if we ever crossed paths it was going to be an easy night for me, and that’s what’s going to happen on Saturday night. It’s going to be easy money. I’m going to expose him.”

The way Covington sees it, a victory sets him up for either a rematch with Usman or a grudge match with Masvidal. But not until he settles the score against the man who is immediately in front of him.

“Both of those guys are going to get it. It doesn’t matter in which order it goes, it could be ‘Marty Fakenewsman’ or ‘Street Judas’ Masvidal. They’re both going to get it unless they’re both cowards and tuck their heads between their tails and run off. Those are the only two fights I’m looking for after I end Tyron Woodley’s career on Saturday night on ESPN.”