5 biggest takeaways from UFC on ESPN 25: ‘The Korean Zombie’ shows a new side, and that’s OK 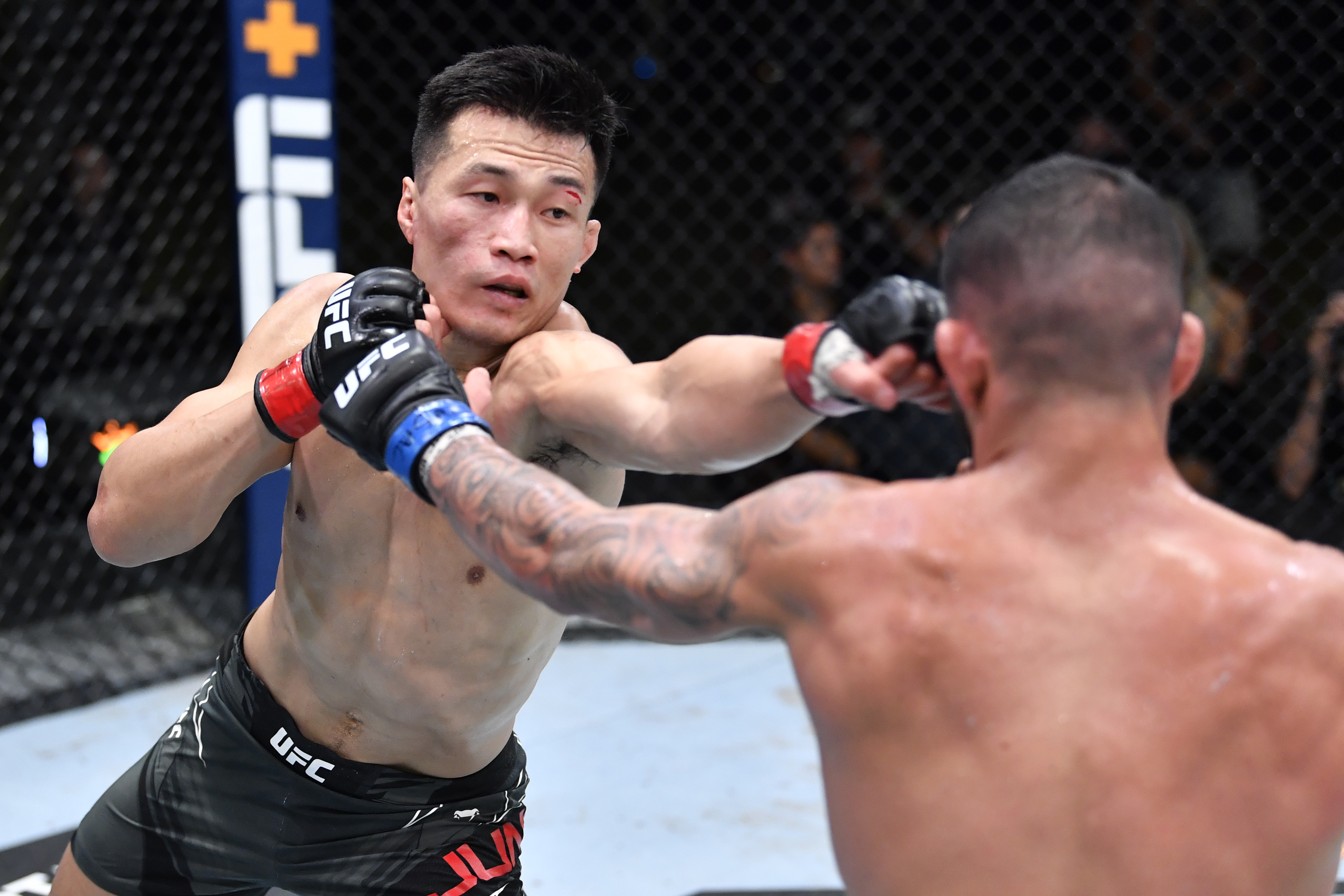 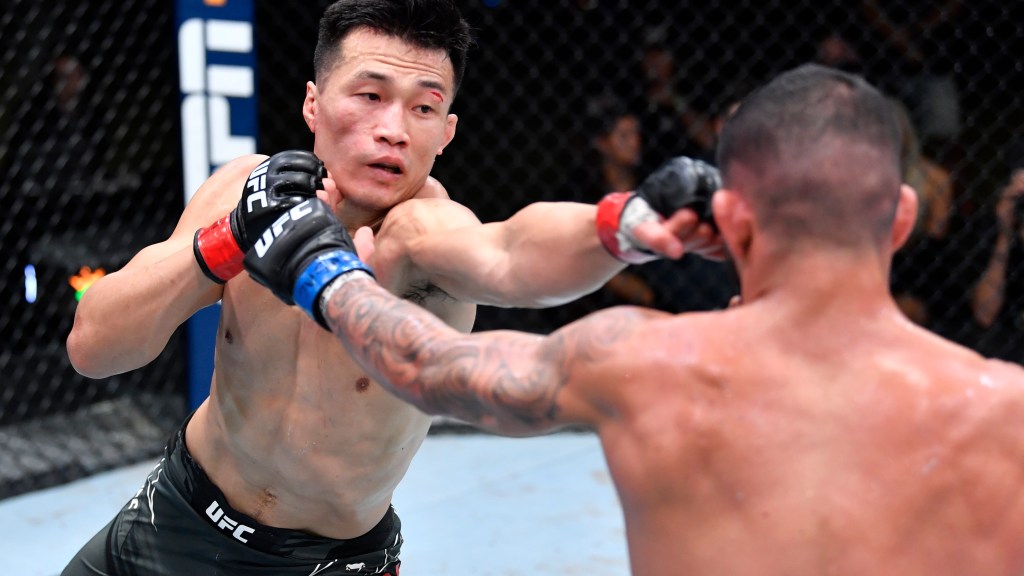 What mattered most at UFC on ESPN 25 in Las Vegas? Here are a few post-fight musings …

Was Chan Sung Jung vs. Dan Ige the epic slugfest many people wanted to see out of them? No, but that’s not necessarily a bad thing, especially if you’re “The Korean Zombie.”

Between myth and reality, the standard for Jung’s (17-6 MMA, 7-3 UFC) fights have reached such an incredibly high mark that it’s almost impossible to meet. This one wasn’t even particular close, though, because Jung relied heavily on his grappling to outpoint Ige (15-4 MMA, 7-3 UFC) over five rounds to win a unanimous decision.

It was the first time in Jung’s career that he’s won a UFC fight and did not receive a fight-night bonus for his efforts, and the first time since 2008 that he needed the judges in a win. For his own self-preservation, that’s not a bad thing. He fought a disciplined fight for 25 minutes in a very important spot. A loss to Ige would’ve likely killed his title aspirations forever, but the win maintains his spot among the top featherweight contenders.

Jung has given us more than his fair share of wars over the years, so no one should have any problems with his approach as he tries to preserve the sanctity of whatever miles he has left in the tank as he tries to make another run at 34.

2. The end of Aleksei Oleinik

By no means are we trying to force Aleksei Oleinik out the door here at MMA Junkie. However, the veteran might need to start asking himself some tough questions after losing a unanimous decision to Serghei Spivac.

For the first time in a storied career that dates back to his November 1996 debut, Oleinik (59-15-1 MMA, 8-6 UFC) has lost three consecutive fights. Of course he’s currently fighting the highest quality competition of his career, which isn’t ideal at 43, but there are some telltale signs that things are likely winding down for “The Boa Constrictor.”

Similar to his fight with Derrick Lewis at UFC Fight Night 174 this past August, Oleinik had Spivac in exactly the positions he wanted on the ground. Not long ago, that would be a wrap and a submission win on Oleinik’s resume. But now his opponents have begun to figure out how to survive, and in Spivac’s case, even willingly engage on the mat.

That’s a bad sign for Oleinik’s future hopes of success. There are going to be a lot of bad nights at the office ahead if he can’t finish when the opportunity arises, because his game is simply not complete enough to hang with the new crop of UFC heavyweights coming through .

For a moment there in the first round, it looked as though Marlon Vera may have been set up in a trap fight with Davey Grant. After losing their initial meeting by unanimous decision in February 2016, “Chito” was given a rare shot at revenge in an uncommon mid-card rematch booking by the UFC.

Grant (12-5 MMA, 4-4 UFC) had some early success, and it had one wondering if the Brit had Vera’s (17-7-1 MMA, 11-6 UFC) number. But then the Ecuadorian turned it on, and never looked back. Vera battered Grant with nasty elbows, big punches and solid shots on the ground to get his hand raised by unanimous decision, and now he’s once again a name to keep an eye on in the bantamweight division.

Vera is one of the people in the sport who is hard to root against. He wears his emotions on his sleeve, and had been through his own series of hardships both in and out of the octagon. Although it feels like he’s been around forever, Vera is still only just 28, and potentially hasn’t even hit his prime yet.

It seemed like he wanted a more complete and definitive performance against Grant to show how far he’s come since the first meeting. It’s respectable that he sets that high bar for himself, but there’s a certain mental hiccup that comes to stepping in that cage against someone who beat you. It looked as though that was going to play to Grant’s advantage early in the fight, but then Vera pulled it together and got it done, which is an impressive feat in its own right.

Matt Brown still had at least one more bullet in his chamber, and he unleashed it on Dhiego Lima’s chin.

Brown (23-18 MMA, 16-12 UFC), who is a veteran fan favorite in the welterweight division, had rightful questions after losing five of his past seven bouts and having turned 40 in January. Power is the last major asset to go in the fight game, though, and “The Immortal” was able to find Lima’s jaw in the second round and get the knockout.

It wasn’t any old knockout, either. It moved Brown into a tie with Derrick Lewis and Vitor Belfort for the most in company history, and also added his own record for most finishes in 170-pound history with 14.

Although he’s never made it to a title fight, Brown has had an impressive career and made his mark in the UFC record books like few others. This would seem like a perfect way to go out, but we know the type of fighter Brown is, and despite having retired before, it’s likely this type of win leads him to believe he can do it again.

The sophomore UFC appearance for Casey O’Neill may have been even better than the debut.

O’Neill (7-0 MMA, 2-0 UFC), the 23-year-old from Scotland, is the 10th youngest fighter on the UFC roster. She won her first promotional appearance by second-round TKO in February, then followed it up by choking Lara Procopio out cold in the third round of their women’s flyweight fight.

It seems O’Neill has all the foundation you could ask for in a young prospect looking to become a future contender. She’s tenacious, motivated and perhaps most importantly of all, self-aware.

O’Neill said post-fight that she wants to take up to six months off before getting back in the cage, because the time between focused training camps is important to her. That’s a good mentality to have, and if she can keep that focus, she has the tools to be a problem down the line.