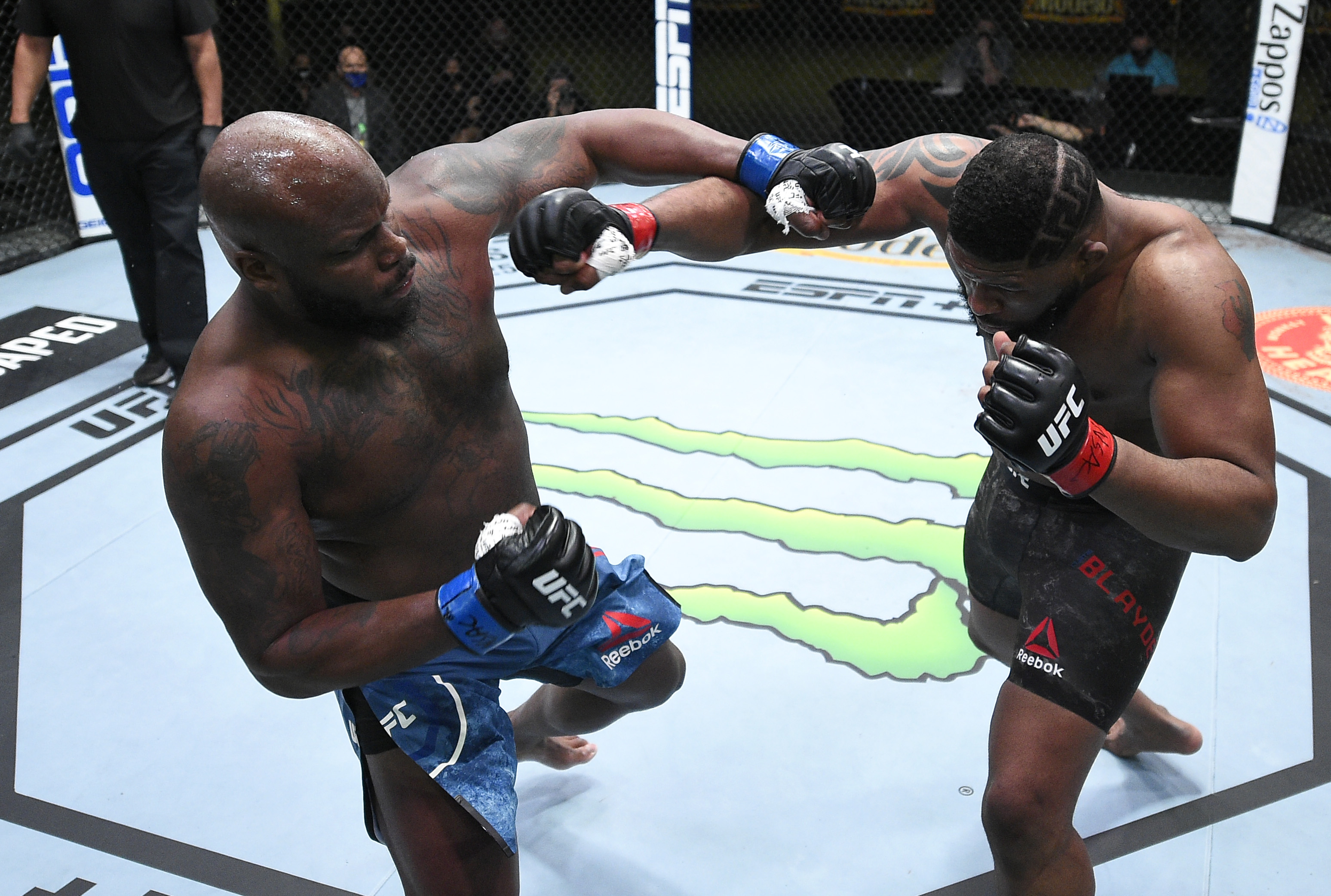 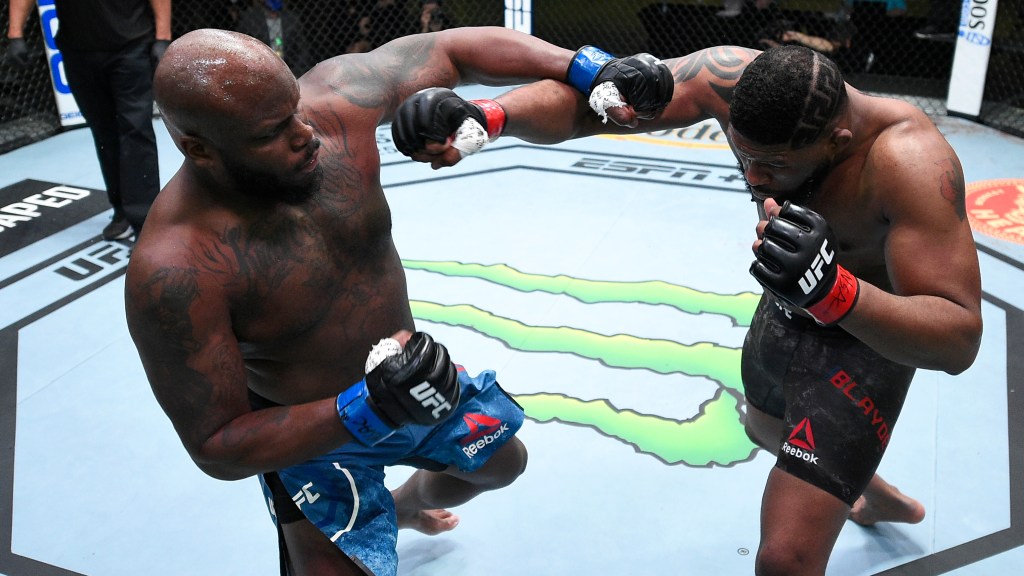 What mattered most at UFC Fight Night 185 at the UFC Apex in Las Vegas? Here are a few post-fight musings …

1. Derrick Lewis does it again

Derrick Lewis reminded us again that he’s probably the most terrifying power puncher in UFC history when he absolutely destroyed Curtis Blaydes with as perfectly timed of an uppercut as we’ve ever see inside the octagon.

At this stage, I don’t know how many times I’ve written these near-exact comments about Lewis (25-7 MMA, 16-5 UFC). A fight isn’t going his way and a loss seemed imminent, but then … boom. He lands something that completely changes the complexion of a contest, and more often than not, leaves his opponent motionless on the canvas.

Lewis has done this in some big spots before. His come-from-behind finish of Alexander Volkov at UFC 229 might still be his defining moment in that regard because of how badly he was losing that fight, but this knockout of Blaydes was infinitely more violent.

“The Black Beast” came into the main event as a fairly significant betting underdog, and was having a really hard time with Blaydes’ striking. He knew a takedown was coming eventually, though, and gave Blaydes a present when he shot in without the appropriate setup.

It’s just so crazy, because when you watch Lewis fight, he largely doesn’t seem to be anything special. He’s flatfooted, uses minimal footwork and isn’t too keen on head movement. His power is just such a radical game changer that it’s doesn’t even matter, and it’s carried to the status of being one of the most successful heavyweights in UFC history.

Lewis’ resume at this point speaks for itself. He’s tied with Vitor Belfort for the most knockouts in UFC history, has the second most wins in heavyweight history, and owns victories over top divisional contenders in Blaydes, Volkov and Francis Ngannou.

Will Lewis ever be able to climb the ultimate mountain and become UFC champion? Only time will tell on that one. However, if anyone thinks he’s incapable of winning literally any fight on any given day due to the X-factors that are his fists, then that’s simply a lie.

First of all, we can only hope the best for Curtis Blaydes’ health after taking a knockout like that. He hasn’t offered a post-fight comment as of this writing, and there’s no doubt he’s licking his wounds after being on the receiving end of an all-time UFC highlight.

It’s unfortunate for Blaydes (14-3 MMA, 9-3 UFC) that the end result will overshadow what otherwise was a promising performance from him. He didn’t get too overzealous with his takedown attempts early on, and was having a lot of success using his striking attacks. MMA is a crazy game, though, and one zig instead of a zag can spell the end, and that’s what happened to Blaydes when he shot for that takedown.

The timing of Blaydes’ takedown attempt wasn’t the only bad thing here. The timing of this loss in his career overall creates a pretty interesting underlying narrative. He revealed before fight night that he was on the second-to-last fight on his contract, which means he now has just one remaining.

Blaydes has been very outspoken over the past year about fighter pay, the lack of incentive to move away from his grappling-based style due to the nature of his contract, and more. His comments have largely been thoughtful and accurate, but those are things that are much easier to get away with when you’re winning and in the driver’s seat.

To be clear: I think it would be a mistake for the UFC not to re-sign Blaydes. He’s obviously one of the highest ranked fighters in a division that really needs his type of talent, but perhaps there’s another promoter out there who would value him even more, should he and UFC seek to explore that option.

The next fight is going to tell us a lot about Blaydes’ future, though. What type of matchup with the UFC give him? Can he put on a performance that warrants a better deal? These are questions I look forward to having answered, but only once he takes the appropriate time to recover from getting his brain rattled in the most violent of ways.

There was measured excitement around Tom Aspinall coming into his fight with Andrei Arlovski after starting his UFC tenure with back-to-back knockouts that included a “Performance of the Night” bonus.

It seemed like the Brit had the potential to be a future player at heavyweight. However, former UFC champion Arlovski is not unfamiliar with the position of “gatekeeper,” if you will, to legitimacy in division.

Arlovski has had success turning back multiple prospects in recent years, but Aspinall wasn’t to be denied by “The Pitbull.” He nearly finished the fight with strikes in the first, then got the slick submission on the former UFC heavyweight champion in the second frame.

Aspinall seems to have all the talent and dedication to succeed, but perhaps more importantly, has shown to have a good head on his shoulders. He wants to earn his keep as he climbs the ranks, and with youth on his side at age 27, he’s a promising talent in a weight class largely built around late bloomers.

Just when you feel like you’ve seen it all in MMA, a scene like Saturday night unfolds, and you realize this sport can still be full of surprises.

Fights have been canceled before at the very last minute. Kevin Holland’s bout with Trevin Giles in 2020 comes to mind, when Giles fainted before both men walked out. But Chas Skelly was literally inside the octagon when we all learned Jamall Emmers wouldn’t be making that walk, and the fight was canceled.

It was the first time in UFC history such an instance had occurred.

Emmers reportedly had some serious back spasms that prevented him from getting inside the cage, and Skelly (18-4 MMA, 7-4 UFC) was left hanging and forced to exit the octagon without a fight. Pandemic-era MMA has shown us some new stuff, but this one is rough, especially for Skelly.

Skelly handled the situation with the utmost class after the fact. He didn’t rip into Emmers, insinuate he was scared or anything of that nature. That’s big of him, because it’s hard to fathom what he must’ve really been feeling like inside. Skelly could not have been closer to letting out the energy to fight after a 17-month layoff, and instead he had to walk away with it all bottled up.

Hopefully he gets his full show and win money, because he did his part in every way.

The theme of this column has centered around the heavyweights, and rightfully so. With four matchups in the division on this card, it was something of a showcase. For the most part, the results were very promising for the future.

The UFC heavyweight division was once seen as a relatively dead weight class. We knew a lot of the names and faces, but the rotation of fresh talent that could be viewed as the future was sparse. Since Mick Maynard took over as matchmaker a few years back, though, it’s become increasingly stable, and UFC Fight Night 185 was evidence.

We’ve already sung the praises of Lewis and Aspinall after their sensational wins, but let’s not ignore Chris Daukaus, who ran through Aleksei Oleinik, or even Serghei Spivac, who dominated the night’s opening fight.

These are all names we should be hearing a lot more of in the future, and Maynard is doing an exceptional job of rebuilding the division from the bottom up. He deserves massive credit for that.

It’s not all perfect, though. The main criticism of heavyweight at this point comes at the top. There hasn’t been more than one title fight in a calendar year since 2018, and if that pace continues, it’s going to be tough to create the turnover needed to develop the talent into real title contenders or champions.

The next title bout is on deck for UFC 260 on March 27 as champion Stipe Miocic defends against Francis Ngannou in a rematch. It’s hard to know when we’ll see the strap up for grabs after that, but for everyone’s sake, hopefully the pace picks up.